Children of original parent if split

A Zombie Bloon is a type of bloon that was introduced in Bloons Adventure Time TD. When fully popped, this bloon leaves a gravestone on the track. In the next round a non-zombie version of the bloon popped will spawn from the gravestone. Up to Ceramic Bloon (plus Lead and Purple) can have the zombie property. Bloons of this type can also have Camo, Regrowth, Fortified, Ghost, and Shielded properties. The property can be removed by Silver Shurikens, Silver Tipped Stakes, and Booboo Sousa. 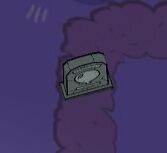 The gravestone left behind by a Zombie Bloon