Bloons Wiki
Register
Don't have an account?
Sign In
Advertisement
in: Articles in construction, Pages with broken file links, Bloons,
and 11 more

The Zeppelin of Mighty Gargantuaness, abbreviated as ZOMG, is a high-health blimp much stronger than the Brutal Floating Behemoth, first debuted in Bloons TD 5. It is the second-strongest multi-HP bloon throughout the series excluding Boss Bloons, and normally among the highest ranking MOAB-class bloons in the franchise, second to the Big Airship of Doom and Boss Bloons. The ZOMG has 4000 health and will release 4 BFBs once popped. The ZOMG moves at 0.18x the speed of a Red Bloon, a Lead Bloon, or a MOAB.

Just like all MOAB-class bloons, the ZOMG can be greatly damaged by attacks that inflict extra damage to MOAB-class bloons compared to normal bloons. The ZOMG is also much larger than a BFB, and most certainly larger than a MOAB, a ZOMG is even easier to be hit by multi-projectile attacks such as Tack Sprayer. Many of the trivial options for handling weaker MOAB-class bloons are unable to affect ZOMGs, an example being the Monkey Pirates ability. However, it is still able to be harmed heavily by other powerful attacks such as First Strike Capability, Bloon Master Alchemist, and Pirate Lord.

ZOMGs can gain more health depending on the game. In Bloons TD 6, the MOAB can become a Fortified ZOMG, as the fortification layer gives it and its descendents with double health, 1400 health for the BFB layer instead of 700. In addition, Freeplay Mode will slowly accelerate their health and speed every round.

The health of a ZOMG can be determined through multiple damage stages. Every 1/4 of the ZOMG's health, 1000 by default, it will appear more damaged. These are usually rips and tears on the blimp's skin. The ZOMG will appear more and more worn out until it is fully destroyed.

The appearance of the Z.O.M.G. is a large, mainly black zeppelin with green stripes and a white skull design, and it first appears on Round 85 in Bloons TD 5, the final round in Hard Difficulty. The Z.O.M.G. was revealed at the end of the BTD5 trailer released on November 29, 2011. It is still the final round of Hard Difficulty in BTD6, only the final round is round 80, and its not the strongest non-Boss bloon out there (B.A.D.s are stronger, but the argument of D.D.T. s vs Z.O.M.G.s still continue). In Bloons TD 6, a new attribute was added to all M.O.A.B. class bloons, called Fortified, doubling HP (Fortified Z.O.M.G.: 8,000 HP (54,592 RBE)) to all bloons, while making their children become also Fortified. As its name suggests:

The ZOMG appears as a boss, but only exclusive to BSM2 Mobile. It is menacing.

ZOMGs are the strongest blimps in the game. One will guarantee to appear on every tile ranked ZOMG or other similar-ranking tiles.

This shows the ramping of a ZOMG's RBE at rounds between Round 1 to 106:

The following are all appearances on each round where ZOMGs will spawn naturally from the entrance. These will not include the rounds where the ZOMG's parents or subsequent parents will feature.

The Z.O.M.G. has an extremely high RBE (red bloon equivalent) of 16,656 and it takes 4,000 hits to pop, where it then releases 4 B.F.B.s. Without a proper defense, its children can rush through the track and easily end the game. On Round 85 in Bloons Tower Defense 5 and round 80 in Bloons Tower Defense 6 there is only one Z.O.M.G. (five in Impoppable Difficulty in BTD5), but in later rounds there are multiple Z.O.M.G.s, increasing even more in later rounds.

The Z.O.M.G. is different from the B.F.B. and the M.O.A.B. because it is immune to the Monkey Buccaneer's Monkey Pirates grappling ability and receives 350 damage from the Monkey Ace's Ground Zero ability, 753 damage from the Bomb Tower's MOAB Assassin ability, and 1,000 damage from the Super Monkey's Bloon Annihilation ability. However, the Bloonchipper's Super Wide Funnel upgrade can still suck in and eventually pop the Z.O.M.G. (except in Bloons TD Battles Mobile), and the Monkey Sub's First Strike Capability can take out an entire Z.O.M.G in one shot

It should be noted that ZOMGs also has Stun Resistance meaning it cannot be stalled easily.

While bloons can normally be allowed to leak with loss of life, the Z.O.M.G. has an RBE (Red Bloon Equivalent) of 16,656, making this strategy practically impossible even with the use of Healthy Bananas. However, it is possible to leak a Round 85 Z.O.M.G. whole and survive with the use of several Support Chinook supply drop abilities, though this is only possible on Steam or mobile.

Aside from appearance, the Z.O.M.G. is almost the same in the flash and mobile versions of BTD5.

The Absolute Zero ability can slow down Z.O.M.G.s.

When the Z.O.M.G. is in its last stage of health, it moves forward a bit. (only the sprite does, the hitbox doesn't change)

The Z.O.M.G has been buffed via game updates, which have made it harder to defend.

Note: The buffs and nerfs refer to according to the power of the ZOMG, and don't necessarily reflect whether it is good or not for the player or opponent.

Z.O.M.G.s (along with the other MOAB class bloons) can now be stalled by Supa-Vac for 8 seconds.

Z.O.M.G.s (along with the other MOAB class bloons) have half the health of their BTD5 counterparts before getting destroyed (4000 HP → 2000).

These quotes are always triggered upon encountering a ZOMG. Some quotes from heroes are identical to those for weaker or stronger MOAB-class bloons.

Health stages of the ZOMG in BTD5 Flash version.

The description of the ZOMG in BTD5 Mobile. 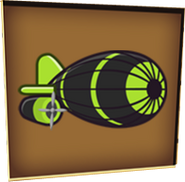 The icon of the ZOMG bloon in its description in BTD5 Mobile.

The Z.O.M.G is stuck in the Bloonchipper. Not its best day. 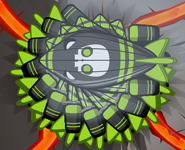 Health stages of the ZOMG in BTD6. 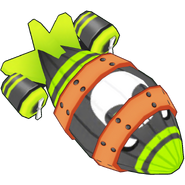 Fortified ZOMG in BTD6, prior to the 8.0 update.

All ZOMG degrade stages in BTD6