XXXL Trap (commonly simpified to Big Trap or Triple XL Trap) is the 5th upgrade of Path 3 for the Engineer Monkey in Bloons TD 6. It replaces the old Bloon Trap with a much larger gray XXXL trap that can eliminate many more bloons (10,000 RBE for it to expire, even if a regular or MOAB-Class bloon would make the trap surpass that value, it will still be eliminated) including MOAB-class bloons (excluding BADs), provided the Engineer could see them at the time of deployment. Like normal Bloon Traps, it grants a +100% pop income bonus after getting full and expiring. These XXXL Traps can continuously stack stockpiles quite quickly, at a minimum of 2.8s. It may occasionally slow down after several consecutive deployments but will come back after around 12 seconds, or 7.2s with 2-0-5.

XXXL Trap replaces the old Bloon Trap with a much larger black trap capable of absorbing MOAB class bloons; the trap has a blue light emanating from its top. Additionally, the Engineer dons a completely yellow suit, red nail guns, and a light grey backpack with a yellow flag that resembles the one found on the Monkey Wall Street.

XXXL Trap functions very similarly to its preceding upgrade, with two major distinctions: its trap RBE is significantly increased, to 10,000, and two, it is able to absorb MOABs, up to ZOMGs.

It receives the same crosspath benefits as Bloon Trap does.

Deployed XXXL Traps are initially set on Close and placed on the track. Such traps can be adjusted to be placed anywhere within valid range of the Engineer by using Selectable Target, if and only if the Engineer has Larger Service Area. If the location becomes invalid and the trap becomes out of range, targeting of the trap is set again on Close on nearby track, the trap will disappear after the trap cooldown passes, autocollect itself, and another trap is produced on a new location based on the reticle of the manual deployment option.

The XXXL Trap is capable of absorbing large amounts of bloons, including blimps. However, it requires support, as blimps may easily slip past the trap when the trap is full and in need to be collected. Backup defenses and slows such as MOAB Glue or Bloon Sabotage are very useful in conjunction with XXXL Trap. Attack speed buffs such as Overclock and Jungle Drums are greatly appreciated too.

In most games, XXXL Trap can easily profit exceptionally well, especially while paired with Rubber to Gold and/or Monkey Town. With sufficient support, it can both profit a lot and deal a lot of overall damage. On C.H.I.M.P.S Mode, where bonus income is banned, XXXL Trap serves as a support DPS role mostly as an exit protection role, although it also performs well as a frontline support DPS role.

XXXL Trap received some bug fixes and and also received some awkward interactions with Bloon Trap reworks. Starting from Version 25.0, it received a sizeable price buff to make it more viable outside of normal games.

When a trap is placed:

When a trap opens up, trapping a bloon:

When a trap closes, upon not detecting more bloons:

When a trap is collected:

XXXL Trap on nearby track 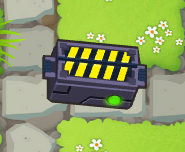 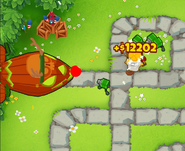 XXXL Trap's trap collecting cash from a Round 1 ZOMG 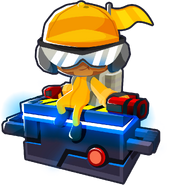 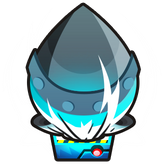