Wish Orbs are orbs that grant special cards. These cards provides items that can aid players in their adventures. There are weapons, trinkets and allies to collect. The player can shard the card if they don't want the item. Upon sharding or obtaining an item, they can take another card for gems. The rarity of the orb determines the rarity of the cards, but they can shift rarities randomly too.

As of Version 1.3.3, autosharding Wish Orbs is now an option to increase the speed of opening Wish Orbs at the cost of potentially losing cards of higher value than the Wish Orb type, which particularly is useful for players who gain massive amounts of low-value Wish Orbs via Thought Cannon Wand farming. The autosharding option is available upon reaching Level 10.

They can be obtained through various means, the most common being clearing a map and obtaining adventure rewards. Other methods include achievements, daily rewards, quests, and events. You can also obtain orbs in-game through some of the items.

Before opening a Wish Orb, science suited Princess Bubblegum opens up a Wish Orb in the order at which was obtained first. Tapping the released Wish Orb will open it. This will spawn three cards, one of which will guarantee the rarity based upon the original Wish Orb rarity, and two of which will have a rarity of either one rank above or below or the same rarity as the Wish Orb rarity. Only one card can be played for free; an additional card can be bought for gems. The second card cannot be sharded and can only be bought.

The following are the amounts required to purchase an additional card upon selecting an item from a Wish Orb.

As of Version 1.3.3, these extra card options are no longer possible via sharding an item of a Wish Orb; an item must be collected to allow the option to purchase one additional card.

This is the amount of shards that are created from sharding specific items.

No weapons are a rarity of Common.

Quick autosharding option, a feature available from Version 1.3.3 and up.

The Legendary Wish Orb, an extremely rare type of Wish Orb given at the end of big events 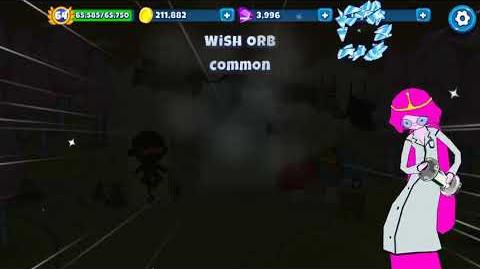