Wattle Trees is a special mission in Bloons Monkey City. The player must pass 25 rounds with only Boomerang Throwers at their disposal, with a free one given at the start and every three rounds (unless on mobile version 1.1 - 1.2.1 due to a glitch). Upon completion, the player is rewarded with $1,000 and the Enchanted Boomerang special item, which increases the Boomerang's popping power by 1 in all games. If the player already has this item they will receive

The rounds are similar to that of a Ceramic Tile, but with 25 rounds (26 in second city) instead of 17-21. There are no Camo Bloons or MOAB-Class Bloons (Camo Detection is only possible in this mission with road items, items or Glaive Lords). However, Lead Bloons can be a problem, so Exploding Pineapples will be essential to pop them until Red Hot 'Rangs is unlocked.

The Final Wave on a Wattle Trees Special Mission

Gameplay on mobile including the version 1.1 glitch (there was five boomerang towers the player had and no free ones appeared). 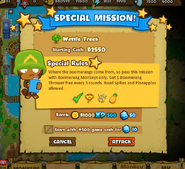 Capturing a Wattle Trees with NLL, a Monkey Teams (10 Dec 2017 was Dart-Boomer), and a MKP

Tile in BMC Mobile
Add a photo to this gallery
Retrieved from "https://bloons.fandom.com/wiki/Wattle_Trees?oldid=243854"
Community content is available under CC-BY-SA unless otherwise noted.