The Wall of Fire is the second upgrade of Path 2 for the Wizard Monkey in BTD6. It creates a crater of fire randomly on the track nearby that lasts for 5 seconds, refreshing every 5.5 seconds (4.5 seconds for Dragon's Breath and subsequent upgrades). The Wall of Fire can pop up to 20 bloons every 0.1 seconds, which is an excellent amount of popping power for a relatively low cost. However, the fire wall's placement is random, making it somewhat unreliable. It also cannot pop Purple Bloons without support. It costs $765 on Easy, $900 on Medium, $970 on Hard, and $1080 on Impoppable.

Wall of Fire no longer has infinite pierce. Instead, it now has 20 pierce per frame.

Wall of Fire does damage half as often.

Wall of Fire no longer pops Purple Bloons without support.

Wall of Fire now disappears upon becoming impacted by a Purple Bloon instead of simply allowing the Purple Bloon to pass by untouched.

Wall of Fire now (correctly) can be deployed/shot further when the Wizard Monkey has increased range.

Wall of Fire official artwork as appears in the upgrade menu 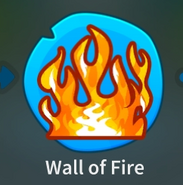 Many Wall of Fires created on the track

Wall of Fire Monkey
Add a photo to this gallery

Retrieved from "https://bloons.fandom.com/wiki/Wall_of_Fire?oldid=238293"
Community content is available under CC-BY-SA unless otherwise noted.