Volcano Terrain is a type of Terrain in Bloons Monkey City. Tracks that belong in this type favor Mortar Monkeys and Monkey Apprentices but restrict Ice Monkeys, Boomerang Throwers and Monkey Villages. Capturing tiles of this type also earns extra Bloonstones, being equal to the minimum City Cash reward divided by 20. This may range from

40. Volcano tracks are among the hardest in the game, due to their heavy restrictions and lack of land that can be placed on. This is likely why Bloonstones are rewarded upon their completion.

Note: the names given are the official names given by Ninja Kiwi fans. Difficulty ratings are based on the track itself, these ratings may differ based on City Level and Tile Difficulty. (These difficulties are in the game code, used for determining Tile difficulty.

My Tracks' sequences for presenting tracks varies between versions of the game.

It has a long curvy shape which kinda looks like a long worm. That is why it is called Squigglecano. Bloons enter from the top left corner wobbling several times and exiting on the bottom right corner.

This is a hard track, presumably because there is more lava than land. It is similar to the Blastapopoulos event track

Like Squigglecano, one can place tack shooters in the curves as they are effective.

Named DNA for its track, the bloons come from the top left, then curving and curving, then it loops towards to the exit.

Named Skyline, because the bloons start from bottom, then going up, then down again, and the same time, forming a "skyline" path, hence the name.

A track which is shaped like a keyhole. Since the track is rather short, this level may be tricky for beginners. Note that the path starts at the bottom and ends at the bottom. 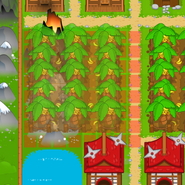 Retrieved from "https://bloons.fandom.com/wiki/Volcano_Terrain?oldid=267440"
Community content is available under CC-BY-SA unless otherwise noted.