Viral Frost is the final upgrade of path 1 for the Ice Tower in Bloons TD 5.

Whenever Bloons touch frozen Bloons, they also get frozen, and so on, spreading it like a virus, hence the name "Viral Frost". The viral freezing effect also affects White Bloons and Zebra Bloons. In BTDB Mobile, Viral Frost also can pop and freeze White Bloons, Zebra Bloons, and Camo Bloons.

The main use of this upgrade is to pass the freezing effect on through lines of bloons out of the tower's range and onto camo bloons. Viral Frost does not spread Snap Freeze. This upgrade works well with Glaive Riccochet combined with Sonic Boom as both work by contact with other bloons. This, combined with a Glaive Lord placed as furthermost left or right at a corner (Arctic Wind slows down the bloons to help Glaive Lord deal more damage), can decimate a whole bunch of closely packed ceramics (although Sonic Boom is required for popping frozen bloons).

The upgrade picture is an Ice Monkey in a blue coat surrounded by snow.

Viral Frost is often unnecessary of a purchase, seeing as Arctic Wind already slows down bloons substantially and actually clumps the bloons up better.

Viral Frost Icon (before the price got lowered) 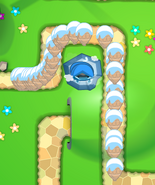 And the freeze can even go outside of its radius