The upgrade, while being cheaper, also only increases the value of bananas collected by 25%. This is still a very large buff, as in BTD6 it only costs 1/5 of what it was in previous titles (in Normal Difficulty), while having 1/2 of the impact. 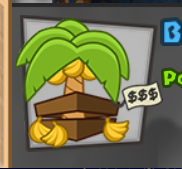 Lots and lots of Valuable Bananas dropped from Race Event
Add a photo to this gallery
Retrieved from "https://bloons.fandom.com/wiki/Valuable_Bananas?oldid=239940"
Community content is available under CC-BY-SA unless otherwise noted.