Upgrades are purchasable enhancements that empower an existing tower. Most upgrades are bought with in-game cash. Most upgrades enhance the overall power of the tower or add new perks that can increase the potential of an existing defense. Some upgrades also add special abilities that can be activated on-demand. Certain upgrades may require special conditions in order to be purchasable, such as buying a previous upgrade of a certain path (e.g. in BTD6, Razor Sharp Shots requires Sharp Shots), or needing a specific tower nearby (e.g. in BATTD, Finn's Brofist requires Jake nearby).

In most games, tower upgrades are constructed in a linear or multi-linear progression of upgrades. Of those games that use a multi-linear progression of upgrades, most towers offer upgrade paths that each can be unlocked up to a certain amount of tiers. For example, in Bloons TD 6, there are 3 upgrade paths, each of which can go up to 5 tiers, plus one additional tier shared by successors of the fifth tier called Paragons. However, some games offer a very different upgrade system, a notable example being Bloons Adventure Time TD, in which all Characters use an integrated-path upgrade system and all Allies use a single-path upgrade system.

(note: this section is unfinished) 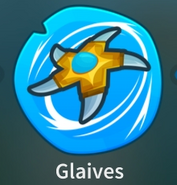