Ultraboost is the 5th upgrade on Path 2 for the Engineer Monkey in Bloons TD 6. It replaces the Overclock ability with the Ultraboost ability. This ability now adds a 6.67% permanent "Ultra Charge" attack speed boost to the ultraboosted tower after the ability is applied to the tower (reduces attack cooldown by 4%). This special attack speed bonus can stack additively up to 10 times, and grant ~66.6% attack speed to the target monkey when maximized (40% attack cooldown reduction). The permanent boost and the overclock boosting are different bonuses, meaning that they are not calculated together. Cooldown for the ability is 35 seconds, 10 seconds less compared to its predecessor, and initial cooldown is reduced to just 5 seconds instead of 15.

Alongside the new ability, the Engineer's nailgun now has 30 pierce instead of 15 from Overclock.

Ultraboost equips the Engineer Monkey with a high-tech visor and an electricity-powered resource generator on his back. Similar to Overclock, the nailgun is actually a technologically advanced gun connected to his carryable generator. The Engineer no longer wears a pencil on his ear, but instead wears ear protection that comes from his high-tech visor. The monkey also wears shoes.

Ultraboost is the most expensive buffing tower in the entire game, excluding Support Sacrifice Temples. It is a greatly improved version of Overclock that adds small permanent attack speed boosts to the selected tower every time the ability is activated onto said tower. In itself, it is pretty weak, but its greatest value comes from maximum stacking for the long-term, most benefiting in the epic late-game (Rounds 101+) when applied to the strongest DPS towers, with particular benefit for Sun Temples and True Sun Gods.

While still the most powerful but expensive support upgrade in the entire game outside of Support Temples, Ultraboost had gained some nerfs and buffs, but overall has been slightly nerfed. Slight cooldown decrease and Ultra Charge application rework arguably are simply quality-of-life changes for this upgrade, and the main attack buff is negligible in late-game scenarios. Price decrease does buff its viability but only realistically to edge its viable purchase on CHIMPS games.

Ultraboost in the upgrade menu 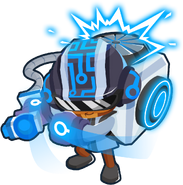 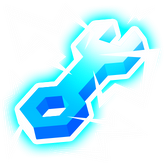