Ultra-Juggernaut is the fifth-tier Path 1 upgrade for the Dart Monkey in Bloons TD 6. It replaces the Dart Monkey's normal Juggernaut with a massive black catapult holding a large orange-red and gray spiked ball. It is unlocked with 22,000 XP. The damage dealt to regular bloons is quadrupled with this upgrade to 4 (quadrupled to 12 for Ceramics), and its pierce is now 200. The 6 smaller spiked balls that emerge are regular Juggernaut balls and therefore still deal only 1 damage to bloons. 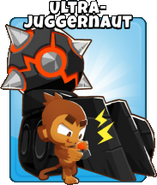 An Ultra-Juggernaut attacking a Round 76 rush. 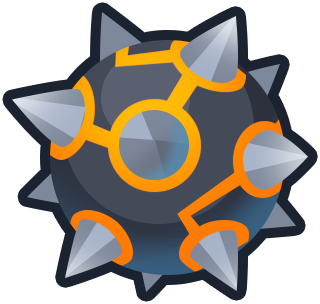 Retrieved from "https://bloons.fandom.com/wiki/Ultra-Juggernaut?oldid=257680"
Community content is available under CC-BY-SA unless otherwise noted.