Knockback (Knocks back most non-MOAB class bloons by 0.1s)

Ultra-Juggernaut is the fifth and final upgrade of Path 1 for the Dart Monkey in Bloons TD 6. It replaces the Dart Monkey's normal Juggernaut with a massive black catapult holding a large orange-red and gray spiked ball. The damage dealt to regular bloons is doubled with this upgrade to 5 (+8 for Ceramics), and its pierce is now 200. The 6 smaller spiked balls that emerge deal 2 damage to bloons and 4 damage to Ceramics with 100 pierce each, equal to those from normal Juggernaut but with double pierce and less bonus Ceramic damage.

This upgrade converts the old large catapult into a lever-automated giant catapult with tank wheels that have a continuous track, orange axles, and the middle of the catapult handle is wrapped with an orange band. The entire body of the catapult is black, and same does the wheels. Unlike most Tier 5 upgrades, the monkey wears no clothing.

Ultra-Juggernaut now launches massive spiked balls that split into those of its preceding upgrade, and themselves deal 4 base damage, +8 to Ceramics, and have 200 pierce. The splitting process results in an Orbital Spray of 6 Juggernaut balls when either half of, or all of, the main ball's pierce is consumed, or the main ball's lifespan completely expires.

All projectiles, including the spawned ones, can now rehit bloons after bouncing off any obstacle.

Ultra-Juggernaut has an unusual niche that allows it to become insanely strong on maps with lots of Line of Sight obstacles. Due to its unique mechanics of rehitting bloons more than once upon bouncing off obstacles, the combined extra damage to Ceramics and overall high damage to other bloons allows an Ultra-Juggernaut to deal serious damage against many grouped bloons within the same location. This is where the presence of many obstacles on the map becomes extremely helpful. Pair an Ultra-Juggernaut with supports from Primary Training, Overclock, and Stronger Stimulant for the best results.

There are a number of maps where it is very recommended to be used on, such as: Hedge, Moon Landing, Encrypted, Balance and Cornfield. In fact, its sheer power on Cornfield without removed obstacles allows it to become a dominant force for completing the "No Harvest" achievement, which involves beating Cornfield CHIMPS without corn removed.

Ultra-Juggernaut became a much stronger option at countering Ceramics and dealing general damage. In addition, it now become a supreme option for maps with large quantities of Line of Sight obstacles.

An Ultra-Juggernaut attacking a Round 76 rush. 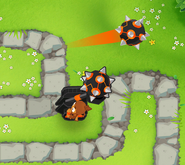 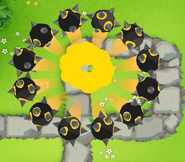 Large juggernaut splitting into 6 juggernauts, while sustaining itself 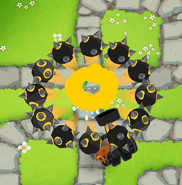 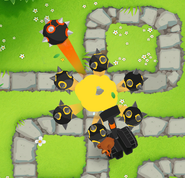 Large juggernaut immediately splitting into 6 juggernauts, while sustaining itself

An example of Ultra-Juggernaut projectiles bursting and bouncing against obstacles 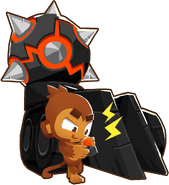 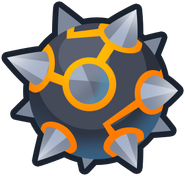