Restricted (upgradable to 2-0-1 and requires another camo detection tower around the map, or upgradable to 3-0-1 and submerged to decamo)

Twin Guns increases the number of barrels of the submarine to two. Most Subs already start with one barrel of a single gun, gaining a second barrel horizontally adjacent to the first, and distributed evenly in a horizontal direction to fit them both. However, Upper Path 1 Subs gain twin pairs of guns on either side of the submarine instead of having literally no visible gun.

Twin Guns improves the Monkey Sub's efficiency at soloing the first few rounds. Because of the Monkey Sub's base 2 pierce, it can shoot quite a number of homing darts before bloons start to exit its range. This makes a 0-0-1 Sub a popular upgrade in CHIMPS early-games.

Incidentally, Twin Guns was also buffed when base Sub pierce got buffed in Version 7.0. Later on, crosspathing interactions with Twin Guns for alternate attacks were added, encouraging variety in crosspathing for non-dart attacks. 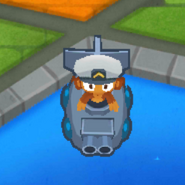 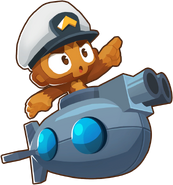