Turbo Charge is the fourth upgrade of Path 2 for the Boomerang Monkey in Bloons TD 6. It comes with an ability that allows it to attack 7x faster than normal and deal +1 damage for 10 seconds, with a cooldown of 45 seconds. While the ability is active, it shoots every 0.0337s. All its boomerangs will always deals +2 damage to MOAB-class compared to the base tower, as it inherits properties from Bionic Boomerang.

Turbo Charge gains a black suit with yellow stripes, a much larger boomerang launcher on its hand, marked with two green chevron-shaped lights rather than rectangles, and adds a vent-like extension to the lens over its eye.

The boomerangs it fires are now dark grey with black stripes.

Crosspathing with path 1 colors the stripes red, then cyan, and it fires glaives when given the upgrade of the same name.

Crosspathing with path 2 gives it red gloves and gives the stripes an orange lining.

Like all Boomerang Monkeys, Turbo Charge can access Change Hands secondary targeting priority to switch hands, changing the origin and direction of the boomerangs.

The following is a list of statistics of a Boomerang Monkey with Turbo Charge. It includes its base statistics and all associated crosspathing interactions. Expand the box on the right to see further information.

The following are a list of wiki-written damage types associated by a Boomerang Monkey with Turbo Chrage. These damage type statistics include how it attacks and how these attacks would affect bloons. Expand the box on the right to see further information.

Turbo Charge is a great option for dealing insane damage against tougher mid-game rounds, specifically rounds with moderate bloon density or if there are strong MOAB-class bloons. When along a location with good curves, a single use of the Turbo Charge ability can make quick work off various difficult rounds, especially when paired with the Glaives crosspath for the extra attack speed and pierce. Correct ability timing is necessary though, as it becomes weak again once the ability ends.

To fully maximize its potential, besides good placement, support it with backup defense while its ability is under cooldown, especially towers designed for countering grouped bloons. Because the Turbo Charge already comes with +1 MOAB-class damage and the ability grants +2 damage while the ability is active, even one activated Turbo Charge is capable of soloing up to BFBs while the ability is active, but it struggles heavily versus densely grouped bloons such as Round 63. Turbo Charge benefits well from the benefits of Primary Mentoring, most particularly the reduced ability cooldowns, and is worth adding Radar Scanner for camo detection. A really good hero to pair with is Gwendolin, as her abilities provide both effective grouped bloon damage and damage versus earlier Camo Bloon rounds.

Turbo Charge is stronger than it did when it was first released. Alongside inheriting the Bionic Boomerang's MOAB-class damage bonus, the Turbo Charge attack speed buff has been increased, making the ability even better at destroying both bloons and MOAB-class. 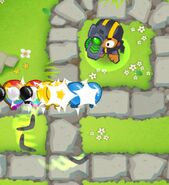 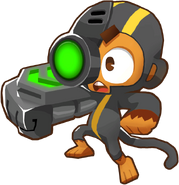 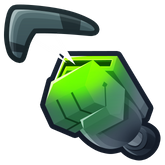