True Sun God is the final Path 1 upgrade for the Super Monkey in Bloons TD 6. Much like the Sun Temple, the True Sun God requires tower sacrifices that will provide it with many awesome powers and benefits. Its shots now pop 15 layers per hit.

It is currently the most expensive upgrade in the Bloons TD franchise, costing $425,000 on Easy, $500,000 on Medium, $540,000 on Hard, and $600,000 on Impoppable, even when excluding its already extremely expensive upgrades and its extremely high-priced sacrifice demands.

When players upgrade, the Sun Temple will become slightly enlarged and the 'head' of the temple will get hit by a ray of light and explode. The True Sun God will then emerge from the top of the temple, followed by a glowing effect.

A maxed-out True Sun God requires intense financial input and expert tower placing planning. $50,000 worth of up to 3 of the following categories of towers (Primary, Military, Magic or Support) must first be sacrificed to a Sun Temple and then a further $50,000 of every category must then be sacrificed to the True Sun God to fully maximise its bloon destroying potential.

Each type of tower provides its own benefits to the True Sun God.

When added to a maxed out Sun TempleEdit

$50,000 in Primary monkeys gives the Sun God golden saw blades that radiate outwards in a circle, as well as two glaives directed towards the Bloons in a wide arc.

$50,000 in Military monkeys gives the True Sun God 4 golden Spectre planes that fly around it, as well as a golden rocket attack that does extra damage to M.O.A.B. Class Bloons.

$50,000 in Magic monkeys gives the True Sun God the ability to summon 4-6 mini Sun Avatars, fire several rainbow magic blasts that home in on the target, and it gains a Ninja Monkey Distraction effect that sends Bloons back towards the entrance through a periodical purple blast at the base of the temple.

$50,000 in Support monkeys makes the temple grant an additional $10,000 per round, summing up to a total of $20,000 income per round. In addition, towers placed inside the temple's range gain a substantial range boost, they can pop 3 extra layers with their attacks (stacks with other abilities allowing for multiple layers popped), their fire rate is boosted, and their upgrades receive a massive (40%) discount. These boosts do not appear to affect the True Sun God itself, however they do affect Sun Temples in range.

Avatar of the Vengeful MonkeyEdit

The Avatar of the Vengeful Monkey is another possible method of sacrifices to build a True Sun God. The Monkey Knowledge "There Can Be Only One" is required to unlock it. It requires a specific combination of sacrifices as described on this page.

No longer produces cash when Support towers are sacrificed in CHIMPS.

No longer applies cost discounts to itself when placed on a raised platform.

No longer locks your hero if sacrificed.

Affected by changes to Sun Temple

A maxed out True Sun God attacks a Fortified B.A.D. 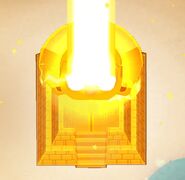 The True Sun God being summoned. 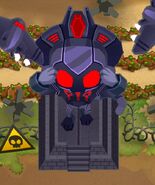 The 'Avatar of the Vengeful Monkey'

True Sun God with mini Sun Avatars around it. "Golden Spectres" are also shooting.
Add a photo to this gallery