999 with a stack of cash at the bottom. Clicking on the chest will give a player tomorrow's Monkey Money, but the player won't be able to open the chest the next day.

Also, occasionally a glitch will occur which causes the player to logout every time they try to open the chest. This is usually fixed by switching computers, and doing so will increase the number of days in a row by one.

On Bloons TD 5 Mobile, as of July 29, 2016, the chest gives a wide variety of rewards, including double Monkey Money (provided for 3 days), free Towers, Special Agents, Tokens, and Monkey Money. When the chest is opened, rewards are shown for the next 4 days, as well as what was earned on the current day. Rewards are stated in the following chart:

In BTD6, the Treasure Chest has been released ever since the game's beta release to the top YouTubers of Bloons TD, a few days before the official release. As of Version 11.0, the entire Treasure Chest system has been modified entirely, with better rewards to entice players coming back.

The chest in BTD5 Mobile 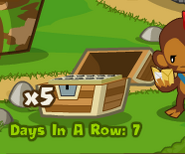 A treasure chest with a 7-day streak 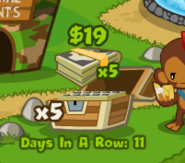 Collecting treasure from the Treasure Chest (with 5x multiplier) 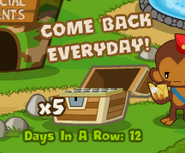 16 with a 5x multiplier being affected)

3 Bloonchippers reward in Mobile
Add a photo to this gallery

Heli Pilot coming up next in Treasure Chest (pre-11.0)

Start a Discussion Discussions about Treasure Chest (BTD5 and BTD6)