Transforming Tonic (generally abbreviated to TT4) is the fourth upgrade of Path 2 for the Alchemist. It grants an ability that transforms the Alchemist into a vicious monster for 20 seconds, temporarily replacing its main attacks with rapidly shooting blue fiery projectiles from its eyes. The super-powered blue plasma lasers are fired at a rate of ~33.3 times per second, deal 2 damage to up to 6 bloons per plasma laser, and can pop any bloon type except Purple Bloons. Unfortunately, similar to all other Alchemists, camo detection is required to allow popping of Camo Bloons. Lasers cannot pass through Line of Sight, even though its other attacks can. Cooldown for Transforming Tonic is 60 seconds (1/3 uptime).

With this upgrade, the Alchemist changes quite visually. The Alchemist's coat becomes unbuttoned and ripped, the Alchemist places his goggles onto his forehead and a slightly crazed look can be seen in his eyes. However, the purple stain in his hair is removed.

When the ability is active, the Alchemist transforms into a blue-and-magenta monster, who, despite holding up fists in front of it like Ice Shards or later upgrades, fires blue lasers from its eyes.

Transforming Tonic gives the Alchemist the needed high DPS that it generally lacks, although limited to the ability. Whenever high DPS is necessary, one use of the ability will give it high damage overall, with an equivalent overall popping power of two Plasma Blasts Super Monkeys with double pierce. The overall price of Transforming Tonic is highly expensive, but it's a cheap option when upgrading from an existing Unstable Concoction Alchemist.

Due to its ability status, the Transforming Tonic upgrade has been buffed to make its ability more useful at popping bloons. 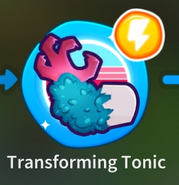 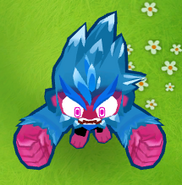 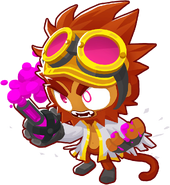 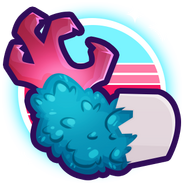