Tranquil Glade is a Special Mission in Bloons Monkey City. Only Dart Monkeys, Ninja Monkeys, and Sniper Monkeys are allowed. To win, the player has to beat 22 rounds where all Bloons are Camo Bloons (similarly to Covert Pops in Bloons TD 5) with an additional 500 cash to start. The tile itself has the appearance of a few trees, and a bunny hopping around. MOAB-class bloons do not appear in this mission. Upon completion, the Ninja Scroll Special Item, which gives Ninja Monkeys +5% attack speed, is rewarded. Only one Tranquil Glade mission will appear on each map.

A Tranquil Glade tile being played 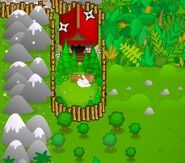