Bloons Wiki
Register
Don't have an account?
Sign In
Advertisement
in: Articles in construction with a WIP, Monkey Buccaneer, Bloons TD 6,
and 6 more

Trade Empire targets bloons using the standard target priorities. It shoots darts that are shot in a straight movement. It can also utilize multiple targeting to shoot projectiles from both ends of the boat if it detects bloons on its opposite side.

As a final upgrade, Trade Empire is relatively weak in its execution, gaining only $300 more for the Buccaneer himself at the end of the round, producing $800 (or $820 with the Trade Agreement Monkey Knowledge) without any new perks such as the increase in sell return when sold within the radius in the Buccaneer, though that ability is carried over from the prior upgrade.

What justifies its placement as a Tier 5 upgrade is its interactions with other Merchantmen and Favored Trades that are actively on the field, allowing each to gain an extra $20 for every single Merchantmen, Favored Trades and Trade Empire. There is a limitation to this however, in that 20 of the above three towers maximize the potency of the upgrade, with subsequent Merchantmen and Favored Trades not increasing the gains of other Path 3 Buccaneers further nor gaining the boost in income at the end of the round. On top of this, the Trade Empire can only count as a stack to the total Path 3 Buccaneers, but does not benefit from the increase in income at the end of the round.

Though the maps that both allow for Buccaneers at all and enough water space for 20 instances at a time limit its usage to maps like Cubism, Spice Islands and Off the Coast, it can allow for one of the easiest offhand economy generators that also provides a considerable amount of offense with options of Grape Shot and default Camo detection.

The conclusion reached for optimal build order is:

The Version 16.0 buffs have given Trade Empire a buff to all Merchantmen on screen with bonus damage, including itself. This is to give the Trade Empire upgrade a little more incentive on CHIMPS Mode other than being simply a "waste of money", while also improving the potential for Merchantmen farming greed.

Trade Empire rotated to the side, and boosted by Overclock

Trade Empire plus many, many Favored Trades. Note that only any random 20 other than the Trade Empire were given the +$400 compared to default 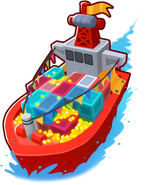 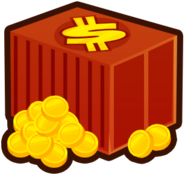