Monster Transformation (ability, up to 5 nearby towers up to Tier-3 to shoot plasma lasers that deal 2 damage, 10 pierce, shoot every 0.03s, and have 96 range, 20s duration)

Total Transformation (generally shortened to TT5) is the final upgrade of Path 2 for the Alchemist. When activated, the Alchemist transforms up to 5 of the nearest monkey-based towers into vicious laser-firing monsters. Just like the main monster, the lasers from transformed monsters can pop Lead Bloons but cannot pop Purple Bloons nor detect Camo Bloons without support. Lasers from the main monster have 6 pierce per shot but those from the subordinate monsters each have 10 pierce. All monsters receive fixed ranges (ignoring external range buffs) and cannot ignore Line of Sight obstacles. Subordinate monsters can inherit certain buffs and often have special interactions with damage types.

The ability lasts 20 seconds and has a cooldown of 40 seconds. If bought immediately from an unactivated Transforming Tonic, the Total Transformation ability will not have an initial cooldown.

When this upgrade is purchased, the Alchemist undergoes a large visual change. The Alchemist is permanently transformed into a monster (note that this change is purely visual and the Alchemist will not attack like when its ability is in use) and the Alchemist's coat is further ripped, removing the sleeves. When the ability is activated, both the goggles and the coat are removed.

Total Transformation adds an ability that transforms up to 5 of the nearest monkey-based towers into vicious laser-firing monsters. Lasers are shot with an attack cooldown of 0.03s per shot, equating to around 33.3x per second, and pop any detectable bloon type except Purple Bloons due to having the Plasma

damage type. The main Alchemist monster still has 6 pierce, but the mini monsters have 10 pierce.

For further information about mini monster interactions, refer to the #Monster Potency section.

The monsterized versions of the towers do not inherit extra range; instead, they will have a fixed amount of large but limited range. Affected towers cannot inherit the power to pop Purples, regardless of whether they can originally pop Purples or not. Affected towers also do not inherit camo detection from the original towers, and require external camo detection such as from Radar Scanner in order to pop camo bloons. Unlike Total Transformation itself transformed towers can't shoot through walls and also don't inherit such ability from the original tower. Most external buffs, including tower-exclusive buffs (i.e. only applies to Shinobi Tactics, Poplust, Elite Sniper, and an active Absolute Zero ability), can stack on top of the transformed monster stats, with exception of Super Monkey Fan Club and Plasma Monkey Fan Club. Any towers that are affected cannot be upgraded until the ability ends.

Total Transformation is expensive but highly effective in combination with particular towers. Because Druids of Wrath and Shinobi Tactics can stack their respective tower-exclusive buffs, transformations of either of these towers will become extremely powerful. Certain towers should be well away from the Total Transformation so as to not interfere with optimal transformation strategies, specifically MOAB Glue and Tier 3 Super Monkeys.

Some quirky interactions with transformed towers have been removed, but in return it has received several buffs to the ability. 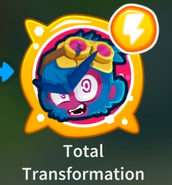 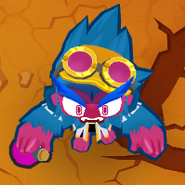 Tilted Ice Shards, caused by the same way as the Arctic Winds.

All versions of monster monkey

TT5 on screen idling. Also is selected with its menu open 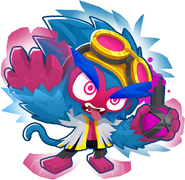 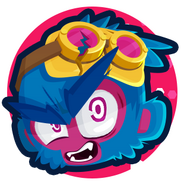 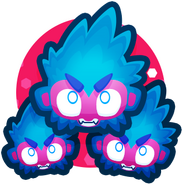