Thorn Swarm is the first upgrade on the second path for the Druid in BTD6. It allows the Druid to throw eight thorns instead of only five. The thorns are still thrown at random angles, but the thorns are overall packed denser as the random angular spread remains unchanged.

Thorn Swarm as seen in the upgrades menu 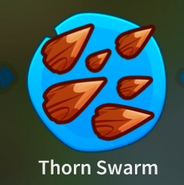 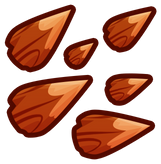