This upgrade makes the Tack Shooter shoot 32 tacks per volley instead of 16, going hand-in-hand with the upgrade's description, "Many, many tacks." In addition to its already extraordinary attack speed, The Tack Zone upgrade also increases its range from 23 to 30, and its attack speed by +33% (equivalent to a 0.75x attack cooldown reduction). Each tack now also pops up to 4 bloons per tack instead of 2 and deals 2 damage instead of 1. Like most Tack Shooter upgrades, it still cannot detect Camo Bloons or damage Frozen Bloons or Lead Bloons without support. And similar to Overdrive, The Tack Zone excels against MOAB-class bloons and becomes more effective against grouped bloons.

The following is a list of statistics of a Tack Shooter with The Tack Zone. It includes its base statistics and all associated crosspathing interactions. Expand the box on the right to see further information.

The following are a list of wiki-written damage types associated by a Tack Shooter with The Tack Zone. These damage type statistics include how it attacks and how these attacks would affect bloons. Expand the box on the right to see further information.

The Tack Zone is a highly versatile tower that should not be underestimated for its relatively low range. The sheer number of projectiles per shot alongside a relatively fast attack speed makes The Tack Zone a very powerful tower when synergized with the right towers. Even though it is most optimally placed around tight bends, it is still very powerful when placed in any region of the map where MOAB-class bloons congregate the densest, as their huge hitboxes render them more susceptible to the frequent swarms of tacks shot out at once. With correct placement, all 32 high-damage tacks will hit the same MOAB-class bloon meeting the center of The Tack Zone, resulting in The Tack Zone being an effective choice against MOAB-class bloons.

The Tack Zone benefits greatly from buffs that grant bonus damage, attack speed, pierce, and range, in that order. Since it already has a decent 4 pierce per tack, it could use more to counter rushed bloons, especially against Super Ceramics. Its base range without range upgrades is decent, but some of its tacks may often miss a few bloons without boosted range. The Tack Zone especially pairs well with Stronger Stimulant, as its brews have just over 100% uptime, and any additional attack speed boosts won't render the brews redundant. Other useful buffs include: Jungle Drums (+15% attack speed), Primary Training (+10% range and +1 pierce), Primary Mentoring (+5 range on top of previous range buffs), and Overclock (+66% attack speed ability).

The best crosspaths for The Tack Zone are Path 1, for +66% attack speed really benefits against blimp hitboxes colliding with The Tack Zone's center. Path 2 crosspaths, while not at all considered useless, means that the Tack Zone would not possess enough attack speed to effectively combat blimps or Super Ceramics in compensation for much greater range and pierce.

A notable combo that is often used on budget CHIMPS attempts (commonly referred to as the 'Pat Zone') is to use this tower with Pat Fusty, as it benefits from his Rallying Roar, dealing massive damage to bloons and MOABs extremely quickly. Not only that, but the stuns and knockback allow bloons to be kept within the Tack Zone's range.

The Tack Zone overall attacks much faster than it did when it was first released, but in Version 23.0 it has gained less base pierce and range in exchange for more damage to balance out with Path 2 crosspathing over the superior Path 1 crosspathing. It also received a price nerf in Version 13.0 to balance out its much greater attack speed. Version 25.0 reverted the price nerf in exchange for the sharp damage type instead of normal damage type.

Overall, The Tack Zone has been very slightly buffed but the Path 1 crosspath has been nerfed by losing a majority of its range and pierce. The 0-2-5 crosspath is, however, mostly buffed. Both crosspaths were strongly nerfed by the damage type reworks in Version 25.0. 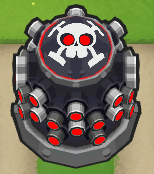 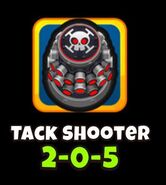 The Tack Zone Instamonkey earned from a Collection Event

New base Tack Zone range as of Version 23.0

The Tack Zone not popping Lead, as of Version 25.0 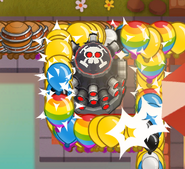 The Tack Zone barrels pushing forward after shooting tacks. The tacks are thinning out a bloon rush 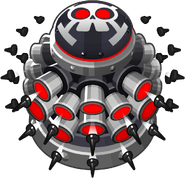 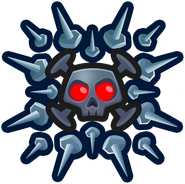