The Bloon Solver is the final upgrade of Path 1 for the Glue Gunner in BTD6. It allows the glue fired to dissolve Ceramic and M.O.A.B. Class Bloons three times as fast. It also allows the Glue Gunner to fire much more quickly, roughly x4 faster, along with gaining a powerful Glue Splatter that allows it to hit up to 12 bloons, 16 with Glue Splatter and 18 with Splatty Glue. However, it can still only hit 1 MOAB-Class Bloon at a time. It costs $20,400 on Easy, $24,000 on Medium, $25,920 on Hard, and $28,800 on Impoppable. 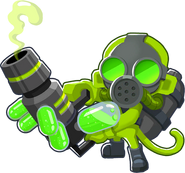 Retrieved from "https://bloons.fandom.com/wiki/The_Bloon_Solver?oldid=226769"
Community content is available under CC-BY-SA unless otherwise noted.