The Bloon Solver is the final upgrade of Path 1 for the Glue Gunner in Bloons TD 6. It improves the liquefying glue to deal 4x damage against Ceramics and 6x damage against MOAB-class bloons, damaging them at a rate of 4 damage per 0.1s and 6 damage per 0.1s, respectively. In addition, The Bloon Solver attacks 4x faster along with gaining a powerful double Glue Splatter projectile that allows both glue splashes to hit up to 6 bloons each. Each shot produces two splatters split by a very small angular distance between. The Bloon Solver is the fastest-attacking Glue Gunner, firing each attack every 0.25s.

The Path 2 upgrades increase splatter to hit 7 bloons with Bigger Globs and 11 Bloons with Glue Splatter.

Outside of increased damage against MOAB Class Bloons & Ceramic shells, its glue acts identically to its predecessor on other bloons.

The Bloon Solver wears a green protective suit throughout the monkey's entire body, carries an enclosed metallic-coated container, and holds a much more advanced glue gun. The glue gun has thin green windows on the nozzle. The monkey wears grey footwear, and the gas mask remains similar to Bloon Liquefier.

On the upgrade portrait, the monkey holds up the glue gun, with a visible green vapor of what is implied to be the toxic pungency of the glue.

It still remains a decent choice against superceramics but most players will find The Biggest One more effective for various reasons, including having a better Tier 4 upgrade, having optional controllability, sufficiently high pierce to withstand large rushes of Ceramics, and gaining significant boosts in power through buffs. In addition, bottom path glue MOAB-class slowdown requires Relentless Glue and to not have the Corrosive Glue or Super Glue upgrades to work well with the Bloon Solver, making blimps have both the slowdown and damage over time on them (as long as the Bloon Solver applies glue first). This also means that mixing glues with The Bloon Solver is unreliable and quite finicky, whereas using The Biggest One can be combined with regular MOAB Glue without causing an unwanted dissynergy.

An effective counter to Super Ceramics and deals decent MOAB-class damage, although the addition of The Biggest One has made The Bloon Solver less of a popular upgrade. Alongside preceding upgrade buffs to make The Bloon Solver more doable upon the saveup for said upgrade, its glue attack got slightly reworked in Version 20.0 to make it synergize better with buffs, more specifically pierce buffs.

One of two splatters from single shot hit bloons 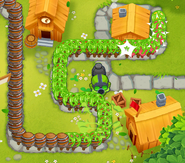 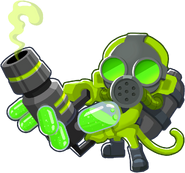