The Biggest One is the final upgrade of Path 1 for the Mortar Monkey in BTD6. It makes devastatingly large explosions, each popping up to 200 bloons and tearing through 20 layers of Bloon, 40 on Ceramics and MOAB-class, and 11 for Ceramics inflicted by the outer region of the shockwave explosion. It costs $23,800 on Easy, $28,000 on Medium, $30,240 on Hard, and $33,600 on Impoppable.

The Biggest One serves a similar role to The Bloon Solver, blasting superceramics while dealing fair damage to MOABs. It has the advantage of a global range, which can be moved around for amazing effectiveness and can also be buffed by Berserker Brew, Pat Fusty and Overclock. It also comes with a few minor disadvantages, namely the price and the fact that it is less likely to catch leaking Ceramic Bloons.

Blast radius (correctly) increased from The Big One size.

The Biggest One deals 3x more damage on Ceramics and above.

The Biggest One without MIB can now (correctly) deal damage to DDTs. 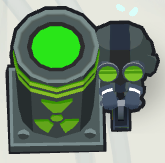 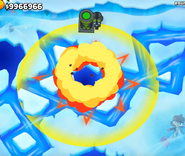 Retrieved from "https://bloons.fandom.com/wiki/The_Biggest_One?oldid=238266"
Community content is available under CC-BY-SA unless otherwise noted.