The Big One upgrades the mortar cannon into a much bigger mortar cannon that shoots black artillery shells, presumably a nuclear-infused shell. The mortar cannon is yellow with thin green bands, and the mortar cannon has a very thick and wide barrel. At the front and back of the barrel, radioactive symbols appear on both sides. The operator now wears a full bodysuit, patterned black with a wide yellow stripe (wide red stripe with 4-0-2 crosspath) at the center of it. Aside from the pattern, this bodysuit is very similar to Glue Hose, which also has a pair of green lenses for the eyes. He continues to wear the same gloves as Shell Shock. In the official upgrade portrait, the operator is looking ahead after launching a shell from the mortar cannon.

The Big One is a rather expensive tower, but it is a good option for dealing big damage to grouped bloons, as well as a fair amount of damage to early MOABs. It is mostly used on maps where unlimited-range crowd control is required, or if planning to purchase The Biggest One later on in the game. Compared to Artillery Battery, which is better against MOAB-class, The Big One is far superior against grouped regular bloons, and particularly Ceramics on pre-freeplay rounds.

Crosspathing choice for The Big One depends on its long-term role. Adding the Rapid Reload crosspath lets the Mortar create explosions at a faster rate, damaging and stunning bloons more often and simply dealing more damage per second. However, Burny Stuff gives The Big One with higher raw DPS, having a significant effect against dense groups of bloons touched by its napalm because the damage-over-time from the Burny Stuff crosspath can quickly disintegrate affected bloons. Both crosspaths favor supports and proper positioning in order to maximize their true damage potentials.

The Big One has overall been buffed, attributed the price decrease and increased blast radius. It received a damage buff in Version 30.0 to improve its bloon-popping power in competition to Artillery Battery, and also received various burning buffs in the past to make the 4-0-2 crosspath actually viable. 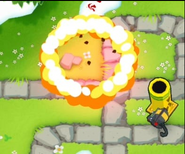 Explosion from The Big One, showing just the size of the blast without the impact visual effects

The Big One with Burny Stuff creating explosions against Round 63 (pre-30.0)

The Big One's explosion radius for both the main and secondary explosions, tested on Rainbows (pre-30.0)

The Big One dealing 5 damage with main explosion and 1 with outer explosion (pre-30.0) 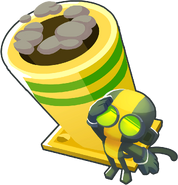 Upgrade portrait for The Big One 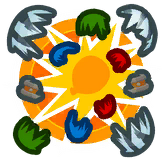 Upgrade icon for The Big One

Instamonkey for The Big One

The Big Burny One (30.0)
The Big One with Burny Stuff in Version 30.0 hitting Ceramic with all parts of explosion