The Anti-Bloon (sometimes referred to as just Anti-Bloon) is the 5th upgrade of Path 2 for the Super Monkey in Bloons TD 6. The Anti-Bloon heavily buffs the Tech Terror's activated ability and increases its base power considerably. The Annihilation ability now does 5,000 damage across a 120 range radius onto up to 10,000 Bloons instead of 2,000. The main attacks also gains +4 damage, has +5 pierce, +10 range, for a total of 5 damage, 14 pierce and 82 range. In addition, it now gains the normal damage type, allowing its main attack to naturally pop any non-camo bloon type including Purple Bloons. With its ability or the Ultravision crosspath, The Anti-Bloon can pop Camo Bloons too. And lastly, critical hits now occur every 13-17 shots instead of every 15-20 shots, and crits deal 50 damage instead of 10, making the damage per shot for a single target range between ~7.647 and ~8.461, with 8 being the average.

The Anti-Bloon is an entirely robotic monkey bearing massive gold-muzzled, light grey plasma cannons on each arm, with red fins on the muzzle and a red grill on each cannon. These cannons are fed by red tubes linking to its main body and head, which is a sinister dark grey color with ominous red lines on its torso. All its limbs are the same color, with its feet bearing red metal rings around the ankles, and the arms linking directly into its plasma launchers.

The Anti-Bloon's head bears the same glowing red eyes as its predecessor, Tech Terror, though with bright lines around where the irises should be, and its mouth, previously bearing white teeth in a grim frown, is now a pair of jagged metal jaws hung open as it appears to be shouting something. The screws for the mouth hinge are clearly visible as well, and it also has a fairly substantial underbite owing to the fact much of its faceplate is sunken-in metal plating of a lighter color.

The Anti-Bloon's annihilation blast, while arbitrarily high, defaults on Close relative to the robot.

The Anti-Bloon can access the Camo Prioritization targeting priority if given the 0-5-2 crosspath, which when set allows the The Anti-Bloon to prioritize Camo Bloons before any other bloon type.

The Anti-Bloon is an expensive option for dealing huge damage versus bloons of all types, with significantly stronger plasma bolts and provides it with a much stronger annihilation ability for wiping out many bloons across a wider scale. It is a very powerful single-tower option, but its pricetag makes it unaffordable outside of large-scale farming. It is possible to purchase Anti-Bloon in a real CHIMPS game, but it is extremely expensive overall, and will likely only be purchasable by at least Round 92.

In the extreme late-game (Rounds 101+), The Anti-Bloon only serves purpose as a required separate sacrifice for the Vengeful True Sun God, alongside Legend of the Night. Because its general DPS greatly diminishes in extremely high rounds, it is worth sacrificing The Anti-Bloon for a 2x strength True Sun God.

Overall buffed in damage potential to increase its expensive value.

When relogging into a game having The Anti-Bloon upgrade: 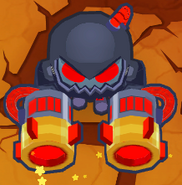 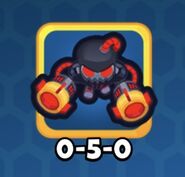 Anti Bloon compared to other towers (Robo Monkey is 230)

All path 2 Super Monkeys (without crosspaths) 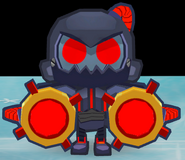 Front-facing Anti-Bloon (only possible via modding) 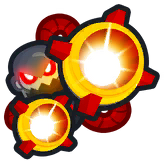 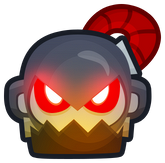 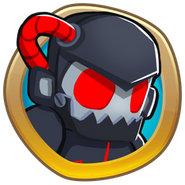 Hard Difficulty icon, marked by an icon of The Anti-Bloon