For the similar BTD6 special upgrade, see Avatar of the Vengeful Monkey.

Temple of the Vengeful Monkey is a more powerful version of the Temple of the Monkey God. It can be unlocked in Bloons Monkey City (through the Dark Temple Idol) and Bloons TD 5 Mobile (through a tier 4 Super Monkey Lair). These temples have much higher range and higher attack speed. In addition, they also shoot two red beams instead of one yellow beam. Each red plasma ball is stronger than the TOTMG's yellow plasma. Therefore, the maxed TOTVM is the most powerful tower in the game, especially when under the radius of both a High Energy Beacon and an MIB Call to Arms village.

In Bloons Monkey City, it is a permanent upgrade that replaces the Temple of the Monkey God when the player acquires a Special Item called the Dark Temple Idol. In BTD5 Mobile, BTD5 Steam, and BMC Mobile, it is an ability that can be activated for ten seconds per use and shoots two beams at a time instead of one, as above. This tower can utterly destroy anything if affected by MIB Call to Arms and Overclock at the same time.

One TOTVM on BMC Flash 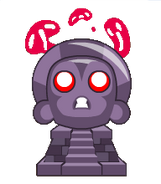 Retrieved from "https://bloons.fandom.com/wiki/Temple_of_the_Vengeful_Monkey?oldid=271852"
Community content is available under CC-BY-SA unless otherwise noted.