For the BTD6 Temple of the Monkey God, see Sun Temple.
For other uses of Temple, see Temple (disambiguation).

Temple of the Monkey God, also known as the Sun God Temple, Temple of the Sun God, Monkey God Temple, Sun Temple, Monkey Temple, Temple, or ToTMG for short, is the final upgrade of the Super Monkey on Path 1. It is the most expensive upgrade in BTD5, costing $85,000 in Easy, $100,000 in Medium, $108,000 on Hard, and $120,000 on Impoppable. When a Sun God is upgraded to a Monkey Temple, everything in the attack radius of the Sun God will disappear and is sacrificed to that temple. If a Temple is in range of a Sun God when this upgrade is purchased, it will be sacrificed, but will not add any abilities other than blades. Note that placing multiple of them can get difficult, as they can sacrifice other temples.

The Temple of the Monkey God can be unlocked once the user reaches Rank 32 and when the player gets enough XP after the Robo Monkey is unlocked. The Temple can attack Camo Bloons regardless of upgrades or sacrifices. It is also best to place the Temple in a place where its huge range would not be wasted. Sun Rays shoot every 0.1 second and have 50 pierce, but strip 3 layers of bloon on contact. They always come with the Temple.

There are 4 tiers of temple sacrifices, seen below.

For the best results, sacrifice $30000 of each Monkey Apprentices, Ice Towers, Bomb Towers or Mortar Towers, Glue Gunners, and any other towers (Monkey Village recommended). Here are some basics to the powers.

It should also be noted that the main beam increases in power as more towers are sacrificed.

Ice: Reloads every 2 sec, bloons freeze for 1.5/2/2.5 seconds upon contact, respectively. Pierce is 1000 for each. Also adds an Arctic Wind effect around the temple for final tier.

Glue: Reloads every .5 sec, bloons pop by the glue in 2/1/0.5 seconds per layer. First tier does not have corroding glue.

These videos will indicate the enhancement of the Temple of the Monkey God by sacrificing towers. 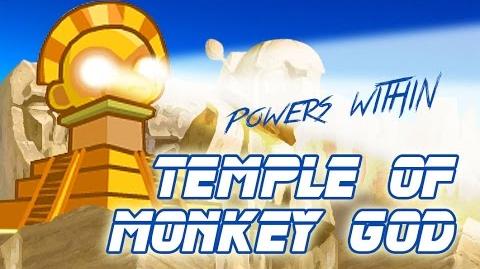 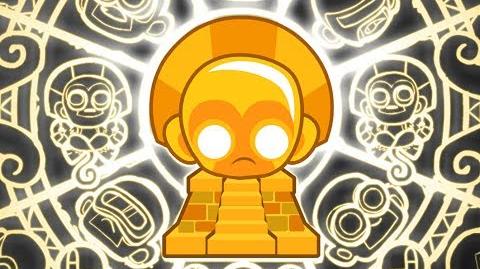 How to Test a Max Temple

How to put Temples near each other[edit | edit source]

Note: If you bought upgrades for the second path as well increasing the range, it will sacrifice the other temple as well. And as long as the range of the super monkey does not cross the exact middle pixel of the temple you can purchase the T.O.T.M.G upgrade without sacrificing the other temple making it possible for temples to overlap. 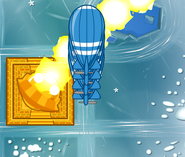 A max temple with all sacrifices on Monkey Lane.

Like the Sun God, the Temple of the Monkey God shoots out a solid beam of bloon destruction when used with M.I.B. Call To Arms.

First time getting the upgrade on Mobile

Temple of the Monkey God in BMC, with the tower name change included

Activating Temple of the Monkey God

Different angles that the Temple shoots around 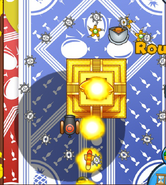 Temple of the monkey god's eyes flash if they destroyed the last bloons at the end of the round.

16 Dart Volley, obtained from sacrificing other types of towers

16 Blade Volley, obtained from sacrificing other types of towers

TOTMG as it appears on a legendary card.

Upgrade icon in BTDB Mobile
Add a photo to this gallery

Retrieved from "https://bloons.fandom.com/wiki/Temple_of_the_Monkey_God?oldid=268712"
Community content is available under CC-BY-SA unless otherwise noted.