Technological Terror shoots green plasma balls, with each shot being able to pierce up to 5 bloons. Purchasing Laser Blasts or Plasma Blasts will increase its pierce by +1 each, although it won't change the projectile graphically.

In BTD6, this upgrade returns as Tech Terror.

This tower also exists as an Epic ally in Bloons Adventure Time TD for $12000. It can be sharded for 1000 shards.

The Technological Terror's lethality is further proven by its ability which completely destroys all types of bloon within its radius except the Z.O.M.G. and B.A.D., which it deals 1000 damage to instead. When the ability is activated, a green force field is erected around the Super Monkey. Despite its power, it can only pop a finite number of bloons, of approximately up to 100 BFBs, 100 MOABs, or about 200 Ceramic Bloons; however, this only occurs in BTD5, as the BTD6's Tech Terror has is able to pop infinite bloons in such annihilation radius as long as the bloons are inside said radius.

It is theoretically possible to achieve high rounds in Deflation Mode by creating Technological Terrors and using their ability, and selling them if the Premium Upgrade Monkey Tycoon is owned and switched on.

The ability does not annihilate any Camos in BTD5 Flash, but will annihilate Camo Bloons in BTD5 Mobile if the Technological Terror is granted Camo detection.

In Bloons Super Monkey 2, the Technological Terror appears as a temporary powerup, obtainable after popping a Golden Bloon or Power-Up Bloon. It retains its infamous reputation for being extremely powerful, being able to pop all bloons almost instantly by periodically creating shockwaves. Its only weakness is Glass Bloons, against which the Technological Terror cannot pop without Research.

Technological Terror is an epic ally in BATTD. It is only equippable by Monkey heroes. It is the most expensive tower in the game, costing $12,000 to place if the player lacks upgrades or trinkets to lower the cost of allies. It acts similar to the original Technological Terror from BTD5, shooting powerful green plasma beams and lacking the ability to detect camo bloons. It can be upgraded to deal additional damage with its plasma beams, and to use its bloon annihilation ability from BTD5, but as a periodical attack rather than a player-controlled ability. Despite its immense power, it suffers from being unable to detect camo bloons or damage Purple bloons.

A Technological Terror attacking a M.O.A.B. 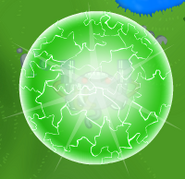 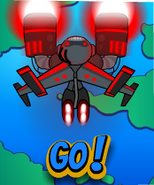 Retrieved from "https://bloons.fandom.com/wiki/Technological_Terror?oldid=259048"
Community content is available under CC-BY-SA unless otherwise noted.