Tech Terror is the fourth Path 2 upgrade for the Super Monkey in Bloons TD 6. It corresponds to the Technological Terror upgrade in BTD5. Along with x0.8 attack cooldown (+25% attack speed), +2 pierce, (9 total) and shooting green plasma balls instead of darts, it gains an ability to deal 2500 damage at up to 2000 bloons within the annihilation range (with a radius of 70), including Camos and Purples. Cooldown for the ability is 45 seconds. Main attack retains the critical hits system gained from Robo Monkey, every 15-20 shots gaining one critical hit inflicting 10 damage.

Tech Terror upgrades into a fully robotic monkey. The robot has various fuel-infused pipes and internal construction that fuels the entirety of itself. Replacing its formerly bionically enhanced arms is a pair of arms that now act as plasma cannons. Tech Terror's head, while having the appearance of a monkey's head, is entirely mechanical; its head has the two fuel-infused pipes connecting from its head to its arms, its face is colored grey, has red circular eyes, and a wide grinded frown.

Tech Terror shoots green plasma balls through both of its arms. When its Annihilation Ability is activated, it produces an immediate pulse of green, accompanied with a robotic voice expressing its energy.

Adding Path 1 crosspaths obscures the Tech Terror's eyes with goggles that correspond to each Path 1 upgrade. Adding Path 3 crosspaths simply add orange stripes, one in the center for Knockback, or two stripes, one on each side, for Ultravision.

Alongside all the unique functionality of its preceding upgrade, Tech Terror receives +25% attack speed (0.8x attack cooldown, or 0.048s), +2 pierce (9 pierce), Plasma type, (popping all Bloon types save Purples) and the Annihilation ability.

The Annihilation ability, when activated, generates a 70 radius blast that deals 2500 damage to up to 2000 bloons in range, regardless of their properties, (it pops Camo and Purple) on a 45 second cooldown.

Tech Terror can access the Camo Prioritization targeting priority if given the 0-4-2 crosspath, which when set allows the Tech Terror to prioritize Camo Bloons before any other bloon type.

Tech Terror's Annihilation Ability is a valuable option for countering extremely clumped bloons. Annihilation Ability deals enough damage to wipe out Fortified BFBs and Fortified DDTs, both of which pose significant problems on Round 98 and Round 99, respectively. In terms of support, Village discounts for saving money when buying Robo Monkey are useful, and slowdown helps let the ability be chained to blast out more bloons in a single use. Stalling the ability is also helpful; don't blast too many bloons at once, and try to leave only a few bloons left so the ability can recharge further.

Its main attack only gains more pierce and attack speed in addition to popping Frozen and Leads in exchange for not popping Purples, only contributing a little bit to the Tech Terror's overall value. The bonus pierce and attack speed is mainly valuable for the mid-game, although the 0-4-2 crosspath allows affected bloons to become more clumped so that its ability can subsequently be chained together. In any case, still try to make use of its reasonably decent DPS, as it still is effective against weaker blimps and Super Ceramics even in the late-game.

Compared to Sun Avatar, which costs a little less than Tech Terror overall, Tech Terror has lower synergy potential, specifically when interacting with Alchemist buffs and Monkey Commerce discounts, but is compensated by its immense solo grouped popping power.

Tech Terror had seen competition with Sun Avatar due to Tech Terror's dependence on abilities and not having a much improved main attack. It has been buffed in many updates to increase its usefulness compared to Sun Avatar. In Version 27.0, its power has been greatly increased overall to counter competition of other high-pierce area options such as the Ground Zero ability.

When relogging into a game having Tech Terror: 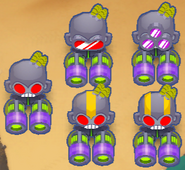 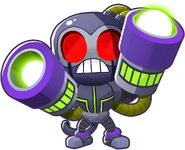 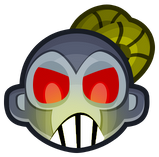