The Tack Sprayer is the third upgrade of Path 1 for the Tack Shooter in Bloons TD 5, costing $425 on Easy, $500 on Medium, $540 on Hard and $600 on Impoppable. Instead of 8 tacks shooting out, it shoots out 16 tacks, making it more powerful than before and pops more bloons too, allowing less bloons to sneak through defences.

In BTD6, this upgrade returns as the third upgrade of Path 3. It has been split from the path containing Faster Shooting and Even Faster Shooting, and instead Tack Sprayer fits along the path that increases the amount of tacks sprayed at once. It also shoots 16 tacks, but it now shoots 16 tacks instead of 12 tacks from Even More Tacks, along with getting a noticeable fire rate increase (by 33% to be precise). It costs $385 on Easy, $450 on Medium, $485 on Hard, and $540 on Impoppable. 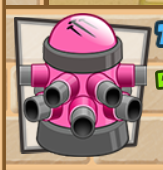 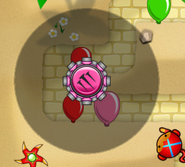 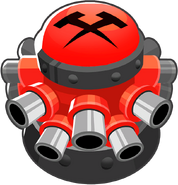 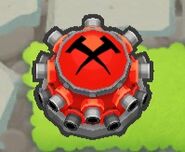 Tack Sprayer Icon for BTD5
Add a photo to this gallery