1 (increases to 2 with blade shooter, 3 in Battles Mobile)

Although it has a short range, these towers are very effective at thinning out crowds of Bloons at corners and intersections. These towers are relatively cheap, making them useful in early rounds. Each individual tack that the Tack Shooter fires has a popping power of 1. This changes with various upgrades. Tack Shooters have a slow rate of fire (0.6 shots per second) compared to other towers initially, which limits their strength.

Unknown
The Tack Shooter, along with the Dart Monkey, Ice Tower, Bomb Tower, and Super Monkey, is one of the towers featured in the original Bloons Tower Defense. These 5 towers also appear in every subsequent BTD game. As with every other tower, the Tack Shooter has one upgrade on two different paths: Faster Shooting and Extra Range Tacks. Unlike BTD3 and future BTD games, the Tack Shooter does not change appearance regardless of upgrades.

There is a glitch with the Tack Shooter, involving the Tab button on the keyboard. Said glitch actually allows one to win using only Tack Shooters, a feat Ninja Kiwi deems impossible.

Unknown
The Tack Shooter appears in Bloons Tower Defense 2. There are no new upgrades for the Tack Shooter or most towers as a matter of fact. The Tack Shooter undergoes no change between BTD and BTD2, in terms of functionality and appearance.

Unknown
In Bloons Tower Defense 4, the Tack Shooter, along with every other tower, gets a huge improvement.

W
Once again, the Tack Shooter along with all towers in BTD gets a huge improvement, with two paths of powerful upgrades.

Ring of Fire attack range can be extended past 4/1. This was a bug in BTD5 Flash.

Blade Maelstrom ability can pop camo bloons if the tower is under the influence of a x/2 Monkey Village.

Blade Maelstrom no longer plays a sound when the ability is activated.

Blade Maelstrom still disperses blades even if sold during the duration of the activated ability.

Tack Shooter hasn't seen as much use in Battles Mobile compared to Flash, possibly due to a less effective Ring of Fire and players only being able to choose 3 towers reliably as opposed to 4. Tack Shooter overall isn't used often as one of three main towers, due to its inability to pop camo bloons, despite being useful early-game. On most occasions when using a Tack Shooter, however, players tend to use Blade Maelstrom in emergencies of rushes such as Regrow Rainbow Rush of Death/Doom. Popular loadouts include Tack Farm Mortar, Tack Farm Sub, and Tack Village Chipper.

Tack Shooter has overall been buffed via game updates.

R (BTD6 Steam)
The Tack Shooter returns once more in the sixth iteration of Bloons Tower Defense, continuing its service as a cheap, area denial-focused tower. Compared to BTD5, the placement of some upgrades have been re-arranged to take advantage of the new three-path upgrade system.

The first path is, like many other towers, a powerful offensive focus, gaining Hot Shots that let it pop Lead Bloons, the Ring of Fire, and the powerful Inferno Ring. The second path is untouched, still focusing on area support. The third path is solely focused on increasing the amount of tacks the Tack Shooter can output, with each tier multiplying tacks per shot.

This tower is not to be underestimated for its low prices: it is highly capable at cheap crowd control that can extend mid to late-game, and third path upgrades increase the amount of tacks that can hit one bloon at a time, with M.O.A.B. Class Bloons and their bulky frames being highly susceptible to multi-hits in particular. A Blade Maelstrom given camo detection can easily destroy any wave of tightly packed ceramics with its ability, outside of Freeplay Mode rules. Overdrive and The Tack Zone can decimate MOAB-class bloons with ease due to both their high attack speed and large numbers of projectiles.

The Tack Shooter is categorized as a Primary class tower. It can receive benefits from the first path upgrades of the Monkey Village, Primary Training, and beyond. 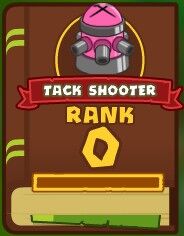 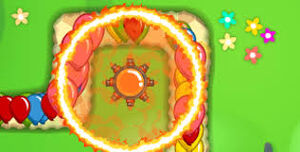 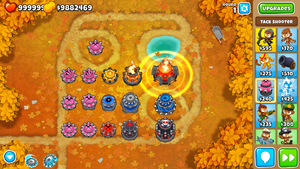 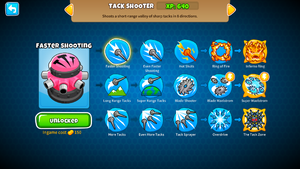 Retrieved from "https://bloons.fandom.com/wiki/Tack_Shooter?oldid=267409"
Community content is available under CC-BY-SA unless otherwise noted.