Support Chinook is the final upgrade on the second path for the Heli Pilot in BTD5. It gives the Heli Pilot abilities to pick up and move towers or drop medical and cash crates. In BTD5, this is the only way to obtain additional lives in Deflation Mode without buying Healthy Bananas. It costs $15000 on Medium in BTD5.

In BTD6, this upgrade returns as the fourth upgrade of Path 2. It also grants cash and lives, but it costs $12000 on Medium instead.

The Support Chinook has two different abilities available, more than almost all towers with abilities. One of these abilities alternates between giving cash or lives, while the other ability can reposition most types of towers to a different location.

Every Support Chinook's Crate Ability has two different crates that can be spawned: a Cash Crate and a Health Crate.

In BTD5 Mobile, the ability to dropping a cash crate becomes immediately available. In BTD6, however, there is an initial cooldown before the Support Chinook is able to deploy its first cash crate.

In BTD6, the cooldown for the Supply Crate ability is 60 seconds. Additionally, each Support Chinook's crate ability can only be used up to 3 times per round.

The Reposition Ability, also referred to as the Tower-Moving Ability, is the ability that allows the Support Chinook to move towers to a new location. Upon activation, the screen will pop up with a menu for moving a tower. Most towers are able to be moved, but there are a number of towers that cannot be moved. Upon moving the selected movable tower to a new spot, the Support Chinook will move (even when set to Lock in Place) towards the selected tower to reposition that tower to a new spot.

The list of towers that cannot be moved include:

In BTD6, the cooldown for the Reposition Ability is 60 seconds.

It is now no longer possible to stack towers on top of other towers with Support Chinook.

Can no longer duplicate towers with Reposition ability.

Cancelling the Reposition ability should no longer revert placement settings. 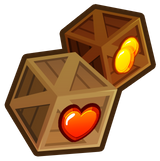 Instamonkey icon for Support Chinook
Add a photo to this gallery