Supply Drop is the fourth upgrade on Path 2 for the Sniper Monkey in Bloons TD 6. Like the BTD5 counterpart, the Sniper gains an ability to call for a crate worth cash. Each crate produces $1,200 when collected, with a cooldown of 90 seconds between each crate, and a max of 3 ability activations per Sniper per round. This upgrade also allows the Sniper's bullets to pop Lead Bloons, even if the Full Metal Jacket upgrade has not been purchased. In addition, shrapnel now pops up to 6 bloons per shot instead of just 3.

The monkey now replaces its camper-style hat into a black-and-brown wig, the black-colored parts being rather coarse and wide whereas the light brown fibres are fine and thin. It carries a supplies backpack with a remote aerial on the bag, with a traditional black-colored wired landline telephone (at least in the upgrade portrait it does). The sniper barrel turns black all over. When the ability is activated, the Sniper fires a harmless signal flare to signal a support role Operation: Dart Storm. The crate will then fly down with a white parachute towards the ground somewhere near the Sniper.

With crosspathing, the color of the brown fibres turn into different colors according to their corresponding crosspath color schemes. Full Metal Jacket turns the fibres red, while Large Calibre turns them purple. Likewise, fibre color becomes grey with Fast Firing, while the color of the fibres becomes orange with Even Faster Firing.

Like many Snipers, the Supply Drop shares similar idle animations. When idle, it may sometimes reload the rifle, chugging out bullet shells off in the process.

Supply Drop shoots bouncing bullets that can bounce up to 3 times each, hitting up to 4 targets with each bullet, as it is the upgrade after Bouncing Bullet. Every time a bullet damages a bloon, the bloon produces a cone of shrapnel in the direction of the bullet prior to collision with the bloon. Supply Drop's improves the pierce of each shrapnel from 3 to 6, and bullets can pop Frozen Bloons and Lead Bloons, popping any bloon type. Shrapnel still requires Full Metal Jacket in order to pop any bloon type.

Supply Drop gains an ability that drops a crate worth $1,200. It takes about ~3 seconds for the crate to arrive in a pickable state. Dropped crates are considered collectables, which can be picked up by touch/cursor but can expire if not collected soon enough. Further information is covered under #Supply Drop Ability.

Supply Drop's ability produces a crate as a spawned collectable that can be manually picked up by the player. Placement of the crate is erratic. The ability has no interaction with any targeting priorities.

Because it is an upgrade above Night Vision Goggles, Supply Drop receives Camo Prioritization, allowing it to prioritize Camo Bloons over other types when active.

This is the 4th tier special ability for the Sniper Monkey. It calls an Operation: Dart Storm that flies in and drops a crate full of cash worth a straight $1,200 per crate. It will stop attacking temporarily as it deploys the ability. It has a cooldown of 90 seconds, and it takes ~3 seconds before the crate arrives to pick up.

Like most income-only abilities, Supply Drop Ability has a full initial cooldown. In addition, Supply Drop can only be used up to 3 times per round. Starting from Version 28.0, Supply Drop abilities are disabled after 3 minutes in a single round.

Supply Drop takes a similar role in BTD5, providing income based on time. However, there are many more viable forms of income generation that take less micromanagement, making Supply Drop one of the weaker income generation options in the game. It is not outclassed by the other income options present in BTD6, however. The highlights of Supply Drop Snipers are their innate camo detection, all having full-map range, possessing accurate grouped popping power, and having the highest income per footprint ratio in the absence of Banana Farms.

Supply Drop's income-producing aspect has been buffed in BTD6 history with several price buffs to the upgrade itself and slightly to its previous upgrade. Compared to other income-producing options, Supply Drop has evolved to become strong damage option while producing a generous flow of income based on time. It has even become practical on CHIMPS Mode with a significant Shrapnel pierce buff added on Version 23.0.

When collecting cash from the Cash Crate: 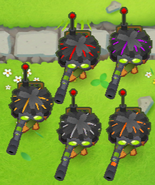 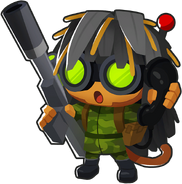 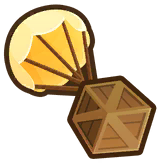