Supply Drop is the final upgrade on Path 2 for the Sniper Monkey in Bloons Tower Defense 5, costing $10,200 on Easy, $12,000 on Medium, $12,960 on Hard and $14,400 on Impoppable. When used, this ability summons an Operation: Dart Storm plane (which does not attack) to drop a small crate with a banana symbol on it, visually identical to the crates produced by the Banana Research Facilty. It contains a random amount of money between $500 and $1,500; the player must hover their mouse cursor over the crate to collect the money from the crate. When first purchased, this ability must go through a 60-second cooldown before use (doesn't apply to Battles), probably to prevent placing x/4 Snipers, selling them, and buying them to use the ability again and again. However, the cooldown for the ability is also 60 seconds. As the money that can be earned from the Supply Drop Ability in a round is not fixed, longer rounds like Freeplay in combination with this ability will earn more than Banana Farms. 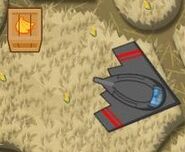 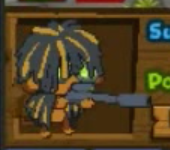 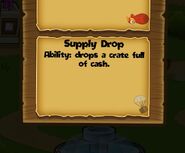 Supply drop description
Add a photo to this gallery

Retrieved from "https://bloons.fandom.com/wiki/Supply_Drop_(BTD5)?oldid=272915"
Community content is available under CC-BY-SA unless otherwise noted.