Superstorm is the Tier 5 upgrade of Path 1 for the Druid in Bloons TD 6. It adds an additional super-tornado to the Druid's arsenal, along with the standard tornadoes, bolts of lightning and ball lightnings. Super-tornadoes are summoned every 4.0s.

The Superstorm upgrade also increases the damage from Heart of Thunder lightning by +2, from 1 to 3, and Ball Lightning lightning by +3, from 2 to 5. In addition, Superstorm automatically gains camo detection, allowing it to see Camo Bloons including DDTs.

Superstorm is a very expensive upgrade, but it produces powerful super-tornadoes capable of blowing back MOAB-class bloons a fair distance and deal a low amount of damage to them. The super-tornadoes attack very slowly, and consume a lot more pierce versus stronger MOAB-class bloons, especially BFBs, ZOMGs, and DDTs. Despite the description of the Superstorm stating that it deals "massive damage", it in fact has only the overall DPS of around 10 Ball Lightning Druids overall. Alternate forms of damage and blimp slowdown or knockback from separate towers should be used instead, although with full Poplust buffs a Superstorm becomes a quite strong blimp staller.

Buffed to make it more useful for its expensive price. Arguably, the Version 23.0 buff had the greatest effect on making its main super-tornado attack much stronger, and therefore dramatically increased its blowback reliability against stronger targets. The Version 22.0 addition of bonus Ball Lightnings while the super-tornado projectile is still active has also increased the Superstorm's damage potential a fair bit. Version 28.0 also slightly reduced its price to make it more accessible in normal games.

When summoning a ball lightning: 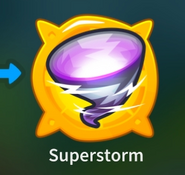 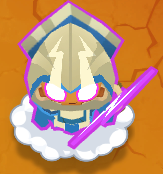 Superstorm with a super-tornado and spawning Ball Lightnings

Superstorm producing many balls from the super-tornadoes

Superstorm's many spawned Ball Lightnings from super-tornadoes, which freeze the bloons

Superstorm blowing back 20 Fortified BFBs. Pictured, some have landed back quickly.

Superstorm blowing back 4 Fortified ZOMGs. Pictured, all are moving but at different times

Superstorm blowing back 10 Fortified DDTs. MOAB Glue was added to give visual aid for this picture by clumping the FDDTs. 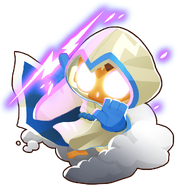 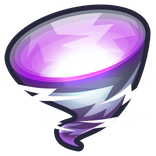 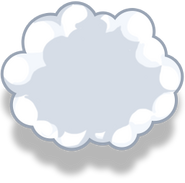 Superstorm's cloud that the Druid sits on