Bloons Wiki
Register
Don't have an account?
Sign In
Advertisement
in: Articles in construction with a WIP, Dart Monkey, Bloons TD 6,
and 6 more

Super Monkey Fan Club is the fourth upgrade of Path 2 for the Dart Monkey in Bloons TD 6. It attacks about ~33% faster than Very Quick Shots. For the ability, there is an initial 20-second period before the it is usable, alongside a 50 seconds cooldown once activated. The ability converts the club leader and up to the closest 9 other Dart Monkeys into Super Monkeys for 15 seconds, as well as increasing their +8 attack range to a flat amount but cannot stack with Long Range Darts or Enhanced Eyesight attack range. Crossbow Monkeys, Spike-o-pults and the "Plasma Monkey Fan Club" cannot be transformed by this ability.

Super Monkey Fan Club gives the monkey a homemade Super Monkey costume, complete with stitched up hood and blue shirt and red cape. (notably, the shirt has a B rather than Super Monkey's dart symbol in 6) It also retains the headband, now also dyed blue, with the red cover now sporting three yellow stripes.

This ability transforms itself and up to 9 other non-Crossbow, non-Spike-o-pult, and non-Plasma Monkey Fan Club Dart monkeys into Super Monkeys for 15 seconds: more specifically, it grants 0.06s base attack cooldown and sets pierce to 40.

Super Monkey Fan Club provides a large amount of extra DPS whenever necessary, all for a moderately high cost. Even a small army of transformed Dart Monkeys can act as an equivalent to a number of base Super Monkeys with extra pierce and the potential for built-in camo detection. On CHIMPS, Super Monkey Fan Club is generally the stepping stone to Plasma Monkey Fan Club, and is used during the mid-game in conjunction with other strong mid-game towers while saving up for said upgrade.

Fixing out the interaction with Total Transformation. While initially not patched by Ninja Kiwi during earlier releases because of both abilities' long cooldowns, the interaction was removed after they said the addition of Co-Op Mode has made the combo too overpowered. 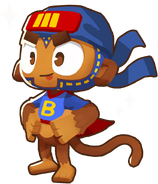 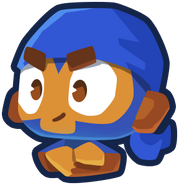