Super Monkey Fan Club (BTD5) is the final upgrade of Path 2 for the Dart Monkey in Bloons TD 5. Its special ability can turn up to 10 nearby Dart Monkeys into Super Monkeys for 15 seconds. This upgrade costs $6,800 on Easy, $8,000 on Medium, $8,640 on Hard, and $9,600 on Impoppable. This ability covers the entire screen, but only converts the 10 nearest to it. It takes 50 seconds for the ability to recharge. The rate of fire also stacks to up to twice as fast as a regular Super Monkey.

The Super Monkey Fan Club ability has a cooldown index of about 0.30 on BTD 5 flash. 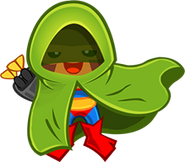 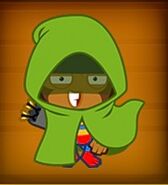 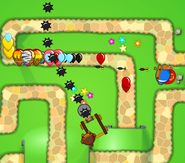 Add a photo to this gallery
Retrieved from "https://bloons.fandom.com/wiki/Super_Monkey_Fan_Club_(BTD5)?oldid=270359"
Community content is available under CC-BY-SA unless otherwise noted.