The Super Monkey makes a cameo appearance, using lasers that can destroy anything, including metal blocks. Use it if you can't complete a certain level. Super Monkeys are limited, so they are best only used when the player thinks the level is very difficult. In addition, you can use a free super monkey on any level you have completed.

The Super Monkey flies over five different levels (plain, jungle, ice, volcano, space) popping bloons while upgrading its abilities. Upon completing the game, the Super Monkey flies up into space with fireworks going on and a crowd cheering is heard. If you lose, it shows an animation of a ripped cape hanging from a tree with a purple bloon and sheep in the background.

Each path of the Super Monkey has the tower follow a different evolution from third-tier upgrades beyond. The first path is a spiritual one, turning the Super Monkey into an Avatar of the Sun God. The second path transforms the Super Monkey through experimental cybernetics and weaponry. The new third path makes the Super Monkey a traditional anti-hero inspired by the Dark Knight iteration of Batman, contrasting with the original Super Monkey's Superman.

The Super Monkey is categorized as a Magic-class tower.

Outside of club arenas such as Mega Boosts and Bananza Mode, The Super Monkey is rarely used because it is too expensive and ineffective as an early-game tower (a 0/0 Super Monkey can't handle grouped Blue Bloons), due to poor lower-level upgrades and a lack of camo detection. Over the years, it has been given various buffs, the most significant of which is Version 4.6, decreasing the cost of the base tower and both of its range upgrades.

The only popular loadouts that utilize the Super Monkey is Ninja-Farm-Super (in Bananza), and Wizard-Farm-Super (also in Bananza).

Bug fixes and other changes[]

The Super Monkey in the Bloons TD 2 intro 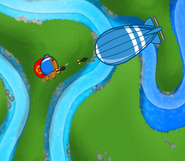 Sadly, only when upgraded to Temple of the Monkey Gods can Super Monkeys detect Camo Bloons without help.

All Super Monkey upgrades (taken during the Version 1.x period)

All Super Monkey upgrades (in game)