Super Mines is the final upgrade of Path 1 for the Spike Factory in Bloons TD 6. While this upgrade decreases attack rate by a significant amount (specifically down to one mine per 3.5 seconds), it makes the Spike Factory shoot much stronger mines that create much larger explosions (from 19 to 100 blast radius) that deal enormous damage (1000 damage, +250 to Fortified) to up to 60 bloons per explosion (instead of 40 from Spiked Mines). Like most attacks, the explosions from Super Mines cannot penetrate through MOAB-class bloons. The Super Mines upgrade also increases damage of each spike from 2 to 50, +20 against Ceramics and +15 against Fortified. Lastly, every time a super mine loses spikes, a mini explosion triggers, popping up to 30 bloons each with a blast radius of 20, dealing 20 damage plus another +10 and +5 against Ceramics and Fortified, respectively.

Super Mines is extremely potent at inflicting massive damage, but it generally falls behind against grouped bloons due to the relatively low pierce of the massive explosions. Similar to most Spike Factories, a Super Mines is best placed at the back of the map to catch large groups of bloons and chip away against MOAB-class bloons. Explosions created from recently expired mines generate double the damage, causing many layers of MOAB-class to eventually fall apart, and happens particularly due to the slow speed of MOAB-class bloons.

With the favorable Even Faster Production crosspath, Super Mines is reasonably decent at soloing before surpassing Round 100, but slowdown support such as Bloon Sabotage and MOAB Glue is necessary on shorter maps. Super Mines becomes much less effective during Rounds 101 to Rounds 120 with the presence of hyperclumped Purples, as its explosions and spikes easily waste potential against these types, and beyond Round 120 it still becomes much less effective due to the immense ramping of MOAB-class bloons.

Super Mines was once considered one of the least powerful Tier 5 upgrades in the entire game, especially compared to its massive price, but the addition of numerous buffs to this upgrade have made it much stronger, to the extent that it now has a practical niche at stockpiling immense damage potential. It received an even larger buff in Version 29.0, overhauling it with various damage buffs across the board. 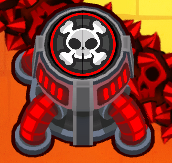 Super Mines and a bunch of super mines

Super Mines explosion about to produce an explosion on the DDT 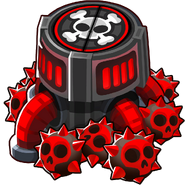 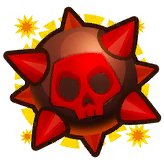