Super Maelstrom is the final Path 2 upgrade for the Tack Shooter in Bloons TD 6. Super Maelstrom enhances the ability significantly by increasing duration (from 3 to 9 seconds), damage (from 1 to 2 damage), pierce (from 200 to 500), and distribution area of the Blade Maelstrom ability (four sawblade spinners instead of two sawblade spinners along a more curved arc). It also allows both the tower's regular attack and ability to pop Lead Bloons and deal 2 damage per blade. Its ability will emit blades every 0.0333 seconds with 500 pierce instead of 200. Cooldown for ability remains at 20 seconds. Neither the basic attack nor the special ability can pop Camo Bloons without support.

Upgrading to Super Maelstrom increases the damage of main blades and ability blades by +1, from 1 to 2. The ability becomes the Super Maelstrom Ability, which sends four blades per shot in a much wider arc, pop up to 500 bloons each instead of 200, and lasts for 9 seconds instead of 3.

Super Maelstrom's main attack shoots a spray of projectiles in an radial spray. Its ability is a rotational spray, rotating at a constant rate as it dispenses multiple blades per shot. Technically, the Tack Shooter is locked on the Close targeting priority. However, for simplicity reasons, Super Maelstorm has no targeting priorities.

The following is a list of statistics of a Tack Shooter with Super Maelstrom. It includes its base statistics and all associated crosspathing interactions. Expand the box on the right to see further information.

The following are a list of wiki-written damage types associated by a Tack Shooter with Super Maelstrom. These damage type statistics include how it attacks and how these attacks would affect bloons. Expand the box on the right to see further information.

Super Maelstrom is an effective low-cost tower for providing high popping power for popping bloons. It becomes most effective on Race Events that enable Tack Shooters, as many rounds can be sent at once for the Super Maelstrom ability to obliterate the vast amounts of bloons coming out in order to gain a significant amount of damage with one single ability usage. It becomes an excellent almost-solo tower with Pat, easily melting dense RBE rounds. Similarly, it benefits hugely from towers that add bloon vulnerability, especially Super Brittle.

Super Maelstrom has been buffed overall, as its ability now deals more damage and lasts much, much longer. The elimination of infinite pierce is negligible because each Super Maelstrom ability blade has an arbitrarily high pierce anyway. 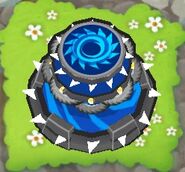 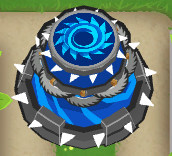 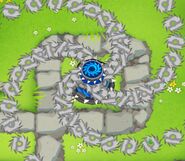 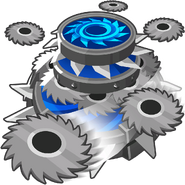 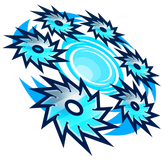 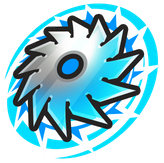