Super Glue (1 / 2.3s corrosion for 24.0s DoT, completely stuns bloons for 24s, main attack, normal bloons, can be reapplied)
Super Glue (1 / 2.3s corrosion for 12.0s DoT, slows at least 90% to MOAB-class bloons for 4.0s, slows by 37.5% for the remainder of the glue duration, main attack, MOAB-class, can be reapplied)
Relentless Glueable (glued bloons that are popped leave a 5.0s duration puddle on the track)

Super Glue is the final upgrade in the third path for the Glue Gunner in Bloons TD 6. It shoots pink globs of glue that slows MOAB-class bloons down by a minimum of 90% while dealing 50 damage to MOAB-class on impact. ZOMGs are slowed by 90%, BFBs are slowed by 95%, and MOABs and DDTs are completely stunned. When Ceramics or other bloons are hit, they become completely stuck for the full 24 seconds without the impact damage. Additionally, pierce of each glue blob is increased to 6 (+1 with Bigger Globs or +5 with Glue Splatter), and all affected bloons receive a very small DoT effect that can stack with Corrosive Glue from 1 damage per 2.3 seconds to 1 damage per 2 seconds.

Super Glue now wears a black outfit instead of the white one than that of Relentless Glue, with a bigger visor obstructing the monkey's face. The two hand cannons also look bigger with a stream of spilled and condensed glue, which explain why M.O.A.B. Class Bloons are immensely slowed. The glue tank now has a red valve on top. Otherwise, Super Glue is the same as Relentless Glue in both appearance and animation. 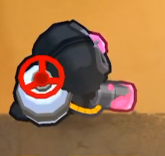 Super Glued Fortified DDTs
Add a photo to this gallery