Bloons Wiki
Register
Don't have an account?
Sign In
Advertisement
in: Articles in construction with a WIP, Glue Gunner, Bloons TD 6,
and 6 more

Super Glue (1 / 2.3s corrosion for 24.0s DoT, completely stuns bloons for 24s, main attack, normal bloons, can be reapplied)
Super Glue (1 / 2.3s corrosion for 12.0s DoT, slows at least 90% to MOAB-class bloons for up to 5.0s, slows by 37.5% for the remainder of the glue duration, main attack, MOAB-class, can be reapplied)
Relentless Glueable (glued bloons that are popped leave a 5.0s duration puddle on the track)

Super Glue is the final upgrade in the third path for the Glue Gunner in Bloons TD 6.

It shoots pink globs of glue that temporarily applies extreme slowdown to MOAB-class bloons down by a minimum of 90% while dealing 50 damage to MOAB-class on impact. ZOMGs are slowed by 90% for up to 0.75s, BFBs are slowed by 95% for up to 2.5s, and MOABs and DDTs are completely immobilized for 5.0s. When Ceramics or other bloons are hit, they become completely stuck for the full 24 seconds without the impact damage. Once the temporarily ultra slowdown effect expires, MOAB-class bloons continue to be under the Relentless Glue effect (37.5% slowdown) for the rest of the glue duration. Unlike other Glue Gunners, Super Glue can target the same bloon more than once even if the bloon is already coated with the same glue.

Additionally, pierce of each glue blob is increased to 6 (+1 with Bigger Globs or +5 with Glue Splatter), and all affected bloons receive a very small DoT effect that can stack with Corrosive Glue from 1 damage per 2.3 seconds to 1 damage per 2 seconds.

Super Glue now wears a black outfit instead of the white one than that of Relentless Glue, with a suit's hood obstructing the monkey's face. The two hand cannons also look bigger with a stream of spilled and condensed glue, which explain why MOAB-class bloons are immensely slowed. The glue tank now has a red valve on top. Otherwise, Super Glue is the same as Relentless Glue in both appearance and animation, both of them are wearing Class-C hazmat suits though Super Glue also wears a ballistic vest.

The glue blobs produced by popped bloons are on-track, at least in general scenarios (outside of additional status effects such as blowback), and can detect camo.

Super Glue is designed primarily to clump up many blimps in place at once and greatly reduce the speed of affected blimps. Its greatest value comes from not needing a MIB to handle DDTs while still dealing decent damage to them. However, Icicle Impale plays a very similar role to Super Glue, and with only a cost difference of around $2120 on Hard for the respective 0-2-5 crosspaths, Icicle Impale is far more flexible thanks to its more flexible stepping stone upgrades than Super Glue's own stepping stones. Compared to the MOAB Glue's minimal effect during the mid-game outside of affecting mid-game MOABs and BFBs and Relentless Glue's generally poor performance with either crosspath, Icicles provides a role for the mid-game grouped popping power, making Super Glue's stepping stone tiers rather ineffective overall.

Super Glue was reworked entirely in Version 8.0 to become basically a weaker Icicle Impale. Instead of a freeze and a fixed slowdown speed, Super Glue became a wannabe Icicle Impale with a large percentage slow and no freeze. The entire rework was done to counteract excessive stalling of income-related abilities, and was done so on top of global initial cooldown nerfs to all income-only abilities. Version 10.0 buffed Super Glue slightly to be more useful versus primarily DDTs and MOABs, but it still does not slow other blimps as much as it did prior to the Version 8.0 Super Glue reworks. Version 26.0 buffed its price to give the upgrade an overall similar cost to the Icicle Impale. 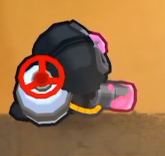 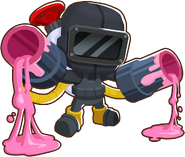 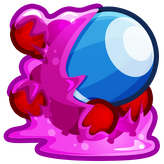 Is The BUFFED Super Glue Good Yet? (Bloons TD 6)
Demonstration of the Version 26.0 Super Glue by ISAB (watch 7:20 onwards for Super Glue in-game)