Vulnerable Freeze (bloons become frozen but can be hit by sharp objects, +4 damage to all attacks for 3.0s once damaged/frozen by freeze attack)
Shardable (while frozen by Ice Monkey, any other tower that destroys the bloon layer will emit spray of 3 shards)

Super Brittle is the fifth and final upgrade of Path 1 for the Ice Monkey in Bloons TD 6. It can affect any bloon type, including White Bloons, and Zebra Bloons, and attacks about 11% faster than Embrittlement. Any bloon damaged by Super Brittle takes +4 damage for 3 seconds and for the same duration, the bloon(s) become vulnerable to attacks that normally cannot pop frozen or lead (DDTs included). MOAB-class Bloons are not frozen in place, but are permanently slowed down by 25% (via the Permafrost effect to MOAB-class, excluding BADs and Bosses). It will deal 1 damage by default but deals 5 damage to any bloon if it hits the same bloon consecutively.

This upgrade changes the Ice Monkey's skin color from red to purple. It loses its pupils and its grey headband; the decoration in front reverts back to a diamond shape. The in-game model's head decoration is slightly different from the artwork, being kite-shaped instead of diamond-shaped. The fur below the chin is more pronounced.

Super Brittle produces freezing blasts in a zone-like style. Technically, the Ice Monkey is locked on the Close targeting priority. However, for simplicity reasons, this monkey has no targeting priorities.

Despite its tiny range, Super Brittle is extremely effective in combination with high-DPS towers, specifically fast-attacking, high-projectile towers (e.g. The Tack Zone), which often utilize sharp-based attacks. In combination with the permanent slowdown via Permafrost effects, the temporary debuff towards regular bloons and MOAB-class bloons can prove super effective at demolishing them, especially DDTs and high-HP blimps (BADs and Boss Bloons in particular), although the Super Brittle itself has rather low pierce for its price. Super Brittle benefits much from the range bonuses from Primary Mentoring, which is much needed when unsupported due to its very limited DPS.

Super Brittle's low range but immense support potential has long been considered underrated among experienced players. It has been slightly buffed over a few updates. 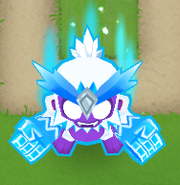 Super Brittle after striking onto the ground, which created a highly damaging freeze 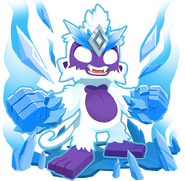 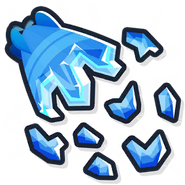