The Being Which Fears No Bloon

A single Sun God is better than having three Super Monkeys with Plasma Vision because it costs slightly less and the sun rays have nearly no limit of poppage due to the hypersonic speed at which they fire, piercing through MOAB-Class Bloons resulting in the bloons behind it being hit.

In BTD5, a single Sun God is actually slightly worse against MOAB-Class Bloons than a Robo Monkey due to the fact that the firing speed of each individual stream of sunrays is half that of a Plasma Vision Super Monkey. However, its advantage stems from its greatly improved popping power of 15, allowing it to decimate regular bloons with ease.

Sun God provides a very large DPS increase and is capable of gaining huge range with Epic Range. However, it lacks innate camo detection, but giving it large simple boosts such as Villages will make it noticeably stronger and better.

It is also the strongest DPS tower in BTD4, but also the most expensive. Farm super hard with Banana Farms to afford such a powerful upgrade.

If the player touches a Sun item in Bloons Super Monkey, indicated as a yellow orb, the Super Monkey will be transformed into a Sun God which will blast sun rays everywhere. The sunrays travel in 5 paths unlike the regular Sun God, each of which branch are composed of three separate blasts that slowly split apart. The sun rays are arguably more powerful than the death ray vision, but if put in the hands of an experienced player, the death ray vision can be more destructive. The Sun God lasts approximately 4 seconds.

The Sun God reappears in BSM2, this time it can only be obtained by popping a Golden Bloon or Power-Up Bloon. Instead of shooting endless sun rays, the Sun God in Bloons Super Monkey 2 attacks with twelve tentacles that greatly resemble Super Plasma Tentacles from the original Bloons Super Monkey. The attack pattern closely resembles a rising sun. 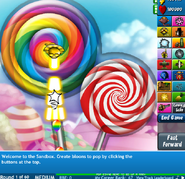 A Sun God fighting an M.O.A.B. 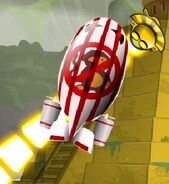 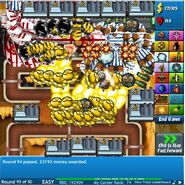 Many many Sun Gods 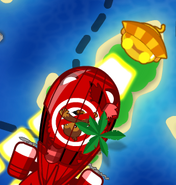 A sun god battling against a B.F.B. in BTD5. 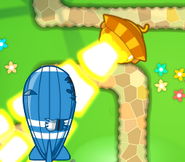 Nooooo!!! Sun Gods won't win because of the red camo!

A lot of sun gods battling many, many MOAB-class bloons. What fun! 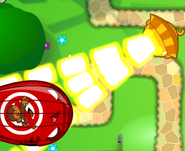 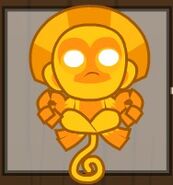 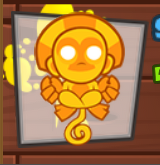 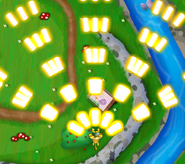 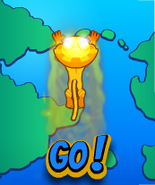 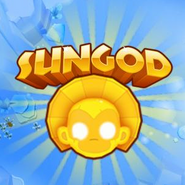