Sun Avatar is the Tier 3 upgrade of Path 1 for the Super Monkey in Bloons TD 6.

Sun Avatar is extremely similar to the Sun God upgrade from Bloons TD 4 and Bloons TD 5. It replaces the Super Monkey's Plasma Blasts with three angled solar rays and increases pierce by +4 (6 in total). Like the Sun God from BTD5, it is extremely potent at popping both regular bloons and MOAB-class bloons. However, it still cannot pop purples without Monkey Intelligence Bureau, or with the Strike Down The False MK Point.

There is also a sub-tower variant of the Sun Avatar, the Mini Sun Avatar, which can be summoned from Sun Temples and True Sun Gods with high-grade Magic sacrifices. These temporary mini versions of the Sun Avatars deal 4 damage per shot instead of 1.

Sun Avatar converts the Super Monkey into a golden avatar of the True Sun God, with a gold cape and suit, as well as a dark yellow headdress and orange band in front of its eyes. Its eyes also glow white.

Crosspathing with path 2 dyes much of its cape red.

Crosspathing with path 3 adds one or two thin yellow stripes along the monkey's head.

per shot; these projectiles are still plasma type and are fired as fast as Plasma Blasts.

With Strike Down The False, they become Normal type, popping any Bloon type.

Sun Avatar is a super powerful upgrade capable of effectively soloing almost all mid-game rounds. With massive support, specifically with Monkey Commerce discount villages, Level 11+ Obyn Greenfoot, and Stronger Stimulant, one Sun Avatar alone can save a long way towards more expensive Tier 5 towers while still being useful late-game. It is best paired with the Knockback upgrade to provide general support at slowing down MOAB-class bloons and Ceramics, which can come in handy later on in the game from Rounds 81+. Compared to the other Tier 3 Super Monkey upgrades, Robo Monkey and Dark Knight, Sun Avatar has the strongest synergy potential but requires high support in order to reach its maximum potential.

The Sun Avatar upgrade has two major weaknesses. One is its considerably high price, but its main weakness is Purple Bloons (except with the "Strike Down The False" Monkey Knowledge). Additionally, although less micro is required for a Sun Avatar compared to the alternate Super Monkey upgrades, Robo Monkey and Dark Knight, it cannot necessarily solo all mid-game rounds, as it still falls behind on Rounds 75, 76, and 78, so other monkeys will also be needed to support on those rounds.

To counteract its major weaknesses, it is best to add a tower combo that is good at countering early mid-game while saving towards the Sun Avatar upgrade. Pairing with good early mid-game combos such as Bloonjitsu + Stronger Stimulant can easily address those issues. Saving up for it in the early mid-game is the hardest part, but it should be considerably easier to safely breeze through mid-game once this upgrade is bought, and this is where the use of discounts via Monkey Commerce and supports such as Obyn and Stronger Stimulant are especially important compared to alternate Super Monkey options.

Sun Avatar was traditionally a very popular mid-game option for Obyn strategies, as it helped carry difficult mid-game rounds while benefiting well in the late-game. It is also the best Super Monkey upgrade to pair with Stronger Stimulant, as its triple projectiles utilize more of the buff before the effects wear off quickly. The popular 3-0-2 crosspath has been nerfed overall, due to its highly effective knockbacking potential, but arguably the 3-2-0 crosspath got a very slight buff because of a slight projectile speed increase and an unchanged pierce.

As strategies started to lean away from Sun Avatar as a mid-game dominator, replaced mostly by Dark Knight, Sun Avatar received a moderate price cut to pull all Tier 3 Supers closer together in cost.

When upgrading to Sun Avatar:

Sun Avatar with no additional upgrades

Sun Avatar with crosspath upgrades (Path 3 at right, Path 2 at left) including a tiny Sun Avatar from Sun Temple 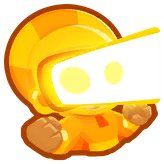