Summon Whirlwind is an upgrade for the Monkey Apprentice. A Monkey Apprentice with this upgrade is called a Disciple of Air in BTD5, or a Monkey Archmage in BTD4. It allows the monkey to summon a whirlwind that can blow Bloons closer to the start.

Compared to Tempest Tornado, it attacks very few bloons, is much cheaper, and doesn't pop bloons.

Change of the Tower[edit | edit source]

The Disciple of Air in BTD5 affects the Monkey Apprentice by making it have a light blue robe and hat. It will also make it carry a wand that has a blue crystal at the end of it.

Put Monkey Apprentices with Summon Whirlwind near the end of a track so that they're more efficient in saving players lives (putting them in the beginning won't blow the Bloons back much).

Summon Whirlwind is a key part of a cash-earning method called Regen Farming, in which players pop a Regen that is a Black Bloon, White Bloon, Zebra, Rainbow, or Ceramic, wait for it to regenerate into two of those kinds, and continue with that, earning more money. This is risky, as if too much is done, players defenses might not be able to handle it. Even more so, only having one Whirlwind Apprentice can be dangerous as it only summons a little whirlwind and takes time to regenerate. Also, this upgrade cannot push back MOAB Class Bloons, and it is effective to get more of a damage output and 2-3 Summon Whirlwind mages. 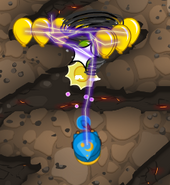 A Disciple of Air blowing Yellow Bloons away.

A Monkey Apprentice with Summon Whirlwind in BTD4.

A Tornado in Bloons Tower Defense 4. 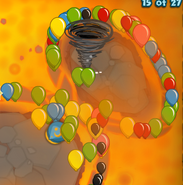 Retrieved from "https://bloons.fandom.com/wiki/Summon_Whirlwind?oldid=246567"
Community content is available under CC-BY-SA unless otherwise noted.