Restricted (can be upgraded to 0/4/2, non-ability attacks)
Yes (phoenix)

Summon Phoenix is the fourth upgrade of Path 2 for the Wizard Monkey in BTD6. It grants the Wizard Monkey with an ability to summon a phoenix that continuously shoots flames directed according to the parent Wizard. Each phoenix flame is shot once every 0.1s and deals 4 damage without the damage-over-time burning effects, and has 6 pierce per phoenix flame. Like all airborne towers, the phoenix can ignore Line of Sight. It lasts for up to 20 seconds (as long as the parent Wizard is on screen), and it has a 60-second cooldown.

The Wizard Monkey grows a mustache and wings grow on its hat.

Upon activation, a deadly Phoenix will appear. It shoots a continuous blast of flames aimed according to the parent Wizard, each dealing 4 damage per flame with 6 pierce. The Phoenix will last for 20 seconds before disappearing. Unlike BTD5, an initial cooldown is required prior to activation of any newly upgraded Summon Phoenix Wizards. Phoenix cannot pop Purple Bloons but can pop camo bloons even without camo detection. Cooldown is 60 seconds.

The ability for Summon Phoenix is useful as a mid-game option for destroying MOAB-class bloons and dealing cleanup at a global range. Phoenixes deal high damage, but it only provides a temporary boost in damage and tends to greatly struggle against dense groups of bloons. Supporting a phoenix by adding additional defense is important.

Alongside some buffs inherited from Dragon's Breath, the Summon Phoenix ability is a lot stronger than it was when the game was first released, mainly for the base phoenix damage. It also had a price cut in earlier versions to make the ability more viable in a mid-game setting.

Summoned Phoenix in BTD6, alongside 0-4-2 Wizard 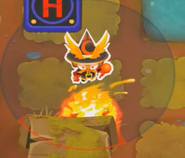 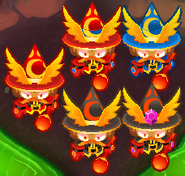 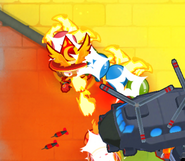 Comparing the paths of Phoenixes with a Centered Path Aces 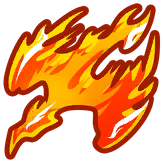